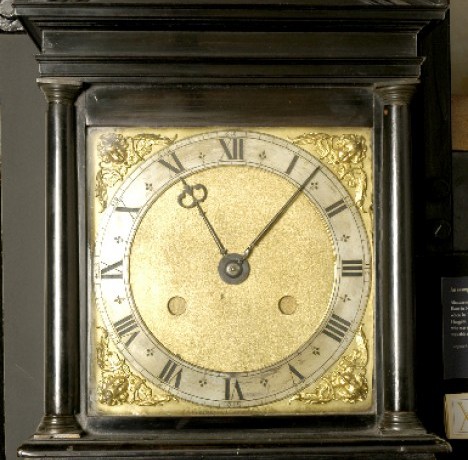 Since Angel has been involved with the blog’s more technical articles, I have discovered a significant amount of extremely curious things that I never would have imagined.

I think all of you know what a Grandfather clock is; the typical clock that we used to see in doctors, notaries or lawyers practises and that struck with a resounding “gong” at each hour. Well these gems that Angel is devoted to restoring were born in the Seventeenth Century, thanks to Galileo Galilei’s investigations and the development of the Pendulum Law.

Galileo worked on the Law but wasn’t able to develop a system that would be able to make a pendulum work constantly. Fourteen years passed until, thanks to this discovery, Ahasuerus Fromanteel managed to succeed in creating the first Grandfather clock in history; hence becoming a character that would fill many pages in clockwork and old machinery books.

Fromanteel was born in Flanders on the 25th February 1607. He was the first of a cabinetmaker’s five sons. He arrived in England with his family to escape the Spanish Conquest, establishing himself in Colchester, Norwich, and then later on in London.

Ahasuerus Fromanteel learnt the masters of ironwork during a period of seven years; however he immediately developed a skill for tower-clocks with a wheel escapement and table clocks wound up by a mainspring (one day we will talk about these!). He joined the guild of watchmakers in 1632 and became a member of the Worshipful Company of Blacksmiths in 1631. Later on he devoted himself to constructing microscopes and lenses. Before the invention of the pendulum clocks, clocks had a daily lack of precision of between ten and fifteen minutes. The use of the pendulum assured an accurate time telling, with an inaccuracy of only a few seconds per day; this factor, whilst sailing for example, is extremely important. With this simple improvement the precision of the movement and progress multiplied by sixty.

In general, pendulum clocks had clockwork that lasted for eight days, which meant that it had to be changed a lot less frequently. In order for this to function, the weight of the clocks ought to be greater (around 12 kilos), and this also means that the construction of the clock’s body should be more robust in order to support the clock’s extra weight, in addition to protecting the mechanism and dial of inexpert hands.

This was the way in which Grandfather clocks were born. This style stayed around for more than two hundred years. It was called the “Clockwork Revolution”.

Fromanteel was the first pendulum clock manufacturer in England, later using the design to make tower clocks, scale and table clocks, as well as pocket watches with a one year clockwork life and a great variety of domestic and industrial motors. He also made and sold pumps for the fire fighting trucks of Norwich city.

As Mark Denny states in his book “Five Machines that changed the world”, Fromanteel’s patent “ushered in the age of English longcase clocks, which dominated horology for a century“.

Have you ever seen how a pendulum clock works?

You are invited to pass by the shop so that Angel can show you a few of the ones we have in motion from more than 30 years ago and that belong to his private collection.

Museum of the History of Science