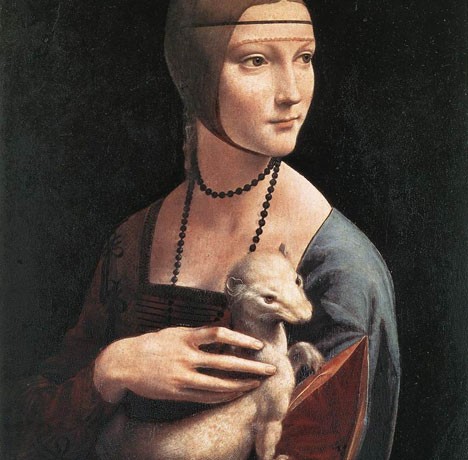 “Lady with an Ermine” arrived to me in a most unexpected way. All of a sudden my Twitter’s entire Time Line filled with news about the arrival of this portrait, by Leonardo da Vinci, toMadrid. They said it wasPoland’s most valuable jewel.

I was inspired by the portrait from the very beginning. The hairstyle and the type of veil that covered her face almost until her eyebrows powerfully called my attention. I wanted to know everything about her… What strange animal did she hold in her arms? The reason for her lost gaze and enigmatic smile, and her necklace… were they pearls or jets? I wanted to have this necklace on our space. I love those long necklaces that were worn so much later in the Twenties. They are one of my favourite accessories, I use them nearly everyday.

I didn’t hesitate for a moment in my decision that I had to write a post about her.

My first idea was to go and see her and then start writing. However, I immediately decided that I preferred to get to know her before, investigate her life, and try to understand what she was like when Leonardo painted her. After, I would go to see her and tell you my impressions.

Her name is Cecilia Gallerani, born in Sienna in the heart of a family with no noble title but a very good economic situation, due to the fact that her father wasFlorence’s ambassador. Her father knew how to transmit his great passion for the arts to her. She loved literature, music and was able to speak Latin perfectly. She wrote beautiful poetry in Italian. All this made her into an unusually educated woman for her time.

She arrived inMilanat 16 years of age and with an elegant introductory letter and her graceful beauty, she didn’t take long to enter and form part of Ludovico Sforza’s (Ludovico il Moro) court.

Ludovico Sforza, Duke of Milan and one of the most powerful and influential men in all of the Italian Renaissance, it isn’t surprising that he fell in love with her nearly instantly and that he would make her his concubine, his official lover, when she was barely 17 years old. Cecilia provided him with a son and Ludovico would donate to him Saronno’s fief in recognition of his love.

Cecilia converted him into one of the protagonists of the numerous social gatherings and cultural activities inMilan’s court. She was compared to fascinating women from the early ages such as Aspia of Miletus (Pericles’ wife) or Asiotea (Plato’s student).

During these years Leonardo worked under Ludovico’s orders as master of ceremonies and the ducal kitchens, by which case Cecilia and he would coincide on various occasions in the Sforzesco Palace of Milan, being logical that Ludovico would commission a portrait of his lover from Leonardo.

Will Leonardo manage to transmit Cecilia’s whole personality? I need to go and see her, and this is exactly what I am going to do tomorrow. Later I will continue telling the story… Cecilia’s necklace in our space

Following my visit to the exhibition on the 28th June in the Royal Palace of Madrid:

Years have passed since I last entered theRoyalPalaceand the truth is that its Parade Ground impresses me every time I step into it… The rooms on the west wing’s ground floor have been the setting chosen bySpain’s National Heritage and Krakow’sNationalMuseumto host “Lady with an Ermine” in its visit toMadrid.

Following the visit to various rooms containing paintings, arms, armour, coins, sacred art… the uncontainable emotion of feeling close to my desired object started to make me feel impatient. Suddenly, as soon as I entered the room dedicated to western paintings in the Polish nineteenth century collections, between the works of art of King Stanislaw II Augustus Poniatowski’s collection, I ran into “Girl in a frame” as if she wanted to step out of the painting, it is the impressive work of the brilliant Dutch master Rembrandt, about whom I would like to tell you all something one day.

Finally as if it were the Golden broach of this magnificent Collection, with no other piece of art in the room to distract my attention, I found myself face to face with her.

What had so called my attention previously, through the illustrations, was the transparent gossamer, finished off with a golden thread that subtly covered her head until just above her eyebrows. Across her, one may perceive her black straight hair falling over both sides of her face and gathered up in a plait. She wears a pearl necklace. The pearls have a special dark toned iridescent shine.

It is improbable that the strange animal that is held over her breast is an ermine. This mustelid is too wild to pose docilely for a portrait over a lady’s arms. It seems that Leonardo used a ferret or an albino polecat, much more easily domesticated and very similar in size and corpulence to the ermine. Perhaps Leonardo used this animal to allude to the name by which Ludovico was known: Ermellino (ermine), or to the fact that Cecilia’s surname coincided partially with this animal’s Greek name (gale).

Leonardo definitely achieves it… Cecilia speaks to me as she peers at me. She transmits goodness, serenity and intelligence to me. Her gaze is both serene and enigmatic at the same time. She is the powerful Ludovico Sforza’s lover, yet her face expresses sweetness, distinction and security. I think she is a self confident lover. She is the concubine of one of the most powerful men of the Italian Renaissance and she shows herself to be proud of this.

I reflect over the differences between today’s youngsters and the contemporaries of Cecilia. Today, a 17 year old is only an adolescent, at the most studying for a high school degree and only worried about clothes, friends and parties.

In the Renaissance a youngster of this age would already be married, probably with a man double her age, which she would hardly know and not love. She would be the mother of more than one child or, even worse and against her will, the lover of some influential and mature man.

Does it not seem incredible to think how these girls lived during the Renaissance?

“Lady with an Ermine” has survived two World Wars, the pilferage of the Nazis, various robbery attempts and now, for the first time since its creation by the hand of the ingenious Leonardo, it finds itself inMadrid. I sincerely think that it is worth the effort to go and see this magnificent piece of work. It is very rare that it has leftPoland where it was adopted in 1800 and I don’t think it will be possible to see it again inSpain now for many years.