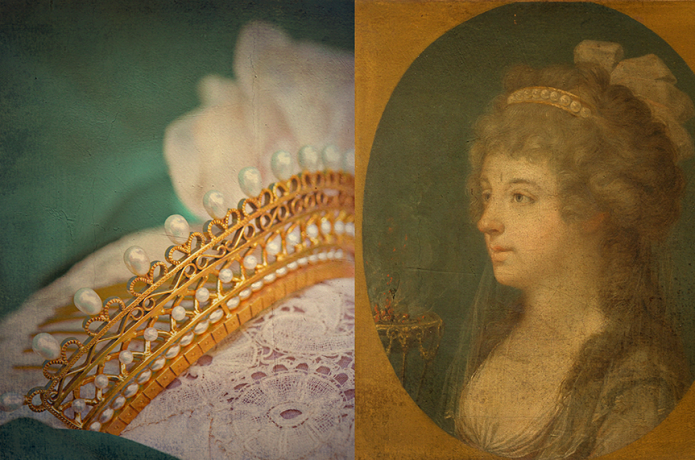 Charlotte Stuart is a beautiful portrait of the Scot artista Hugh Douglas Hamilton. She also is the protagonist of our new section “Ladies of the Antiquity”. The painting is currently in the Scottish National Portrait Gallery.

She wears a stunning tiara in gold and pearls to hold up her perfectly curly and blonde hair.

The portrait let us see the fineness of the lace around her neckline, part of a heavy dress in dark green velvet. Charlotte Stuart, was the Duchess of Albany and the illegitimate Prince Charles Edward Stuart daughter. She was abandoned by her father and had to live with her mother until she decided becoming into a nun.

Rumors say she was Ferdinand Maximilien Mériadec’s lover, the archbishop of Bordeaux.

Over the years, she made up her relationship with her father and moved to Florence to live with him. It was in that time when her father gave her away the title of Duchess of Albany with the courtesy of Royal Highness. However despite this, she didn’t have access to the Crown. Because of the mailing that was discovered by mid of the 20th century, we now know Charlotte had three children (two daughters and a son). Charlotte’s mom was who decided to keep them hidden. Apparently, all three children were archbishop’s so she tried to avoid the scandal.

Charlotte’s father introduced her to society and even allowed her to wear the Sobieski jewelry.

We are sure she would’ve chosen this tiara in golden brass and fresh water pearls. A jewelry to highlight her beautiful long hair…