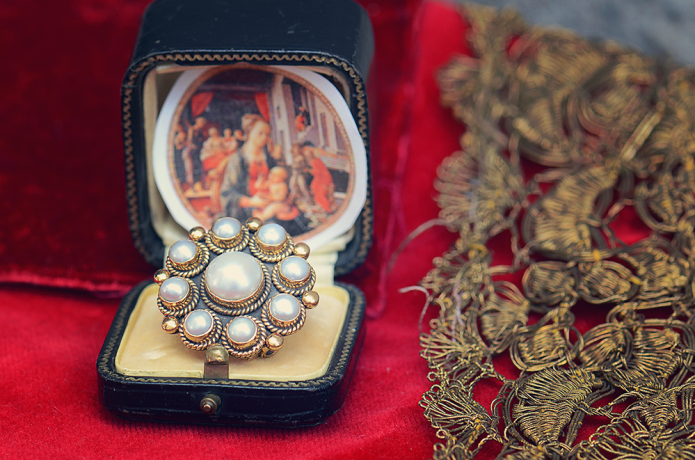 Let me show you today a jewel inspired in one of the Filippo Lippi’s most emblematic paintings. A small pearl brooch that the Madonna wears in Madonna and Child. It’s a 135 cm. tempera on panel the Renaissance artist created about 1645. Today it’s part of the Palatina Galery Collection, in Florence.

He was from a very humble family. In 1421 he joined the Santa Maria del Carmine monastery in Florence, very close where his family lived.

Therefore, the young friar had the chance to admire the frescos that within the 1420’s decade, Masolina and Masccio painted in the Brancacci chappel, in the close church. That experience was crucial to encourage Lippi to pain. Some said once the Masaccio’s spirit was dancing inside Filippo Lippi. It was in 1434 when Filippo left the monastery to move in to Padua.  By the end of the decade he had already his own studio in Florence, where he could show his talent soon enough. In a letter from April 1st 1438 to Piero de Medici, Domenico Veneziano mentions Filippo Lippi and Fra Angelico as the best artists in the world (by the time).

Filippo made many religious paintings with smart and elegant symbolism: the “Pietá” (piety) theme and the Annuntiation as well as portraits. From 1440 Filippo evolved to a courtly sytle, with brighter colores, soften lines, more complex and more spacious around his main characters. That was the style wished by those who ordered a painting from him, mainly the Medici family and close friends. He also painted the communion table for Cosimo il Vecchio (before 1459). Between 1452 and 1466 Filippo focused on his most ambitious project: the frescos of the Prato Cathedral. During his stay in Prato he fell in love with Lucrezia Buti, who lived in the Santa Margarita convent. Through the Cosimo de Medici intervention he got Lucrezia out of the convent in order to marry her. The couple had a child, Filippino, who followed his father’s steps as a reknown artist.

In 1467, when he was ordered the fresco “Scenes of the life of Virgin Mary” he moved to Spoleto with the whole workshop. He worked on this project until his death in 1469. Later, where Lippi was buried, Lorenzo il Magnifico made a monument to the artist, designed by his son Filippino.

Among his pupils and contributors were Fra Diamant, Filippino Lippi and Sandro Boticelli.