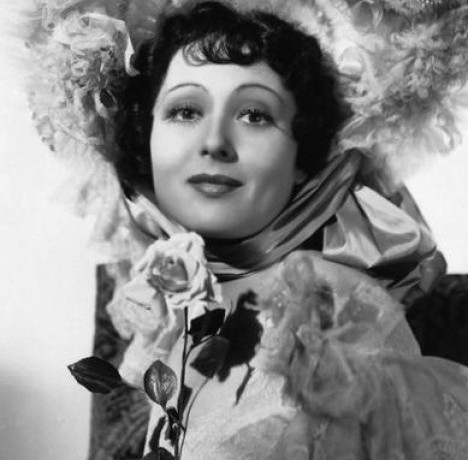 There were two years that marked her life, 1936 and 1937. During them she received awards from the Oscars Academy for best supporting actress in “The Great Ziegfeld” and “The Good Earth”. The actress, German by birth, American by adoption and English at heart, has spent more years out of the focus of Hollywood cameras that on set.

She was the first actress in history who managed to win two consecutive Oscars, an achievement that only Katherine Hepburn equalled and the only German actress to accomplish it. However, she is more popularly known for being the actress that managed to steal the Oscar from Greta Garbo for her magnificent Margarita in “Camille”, instead of for her own successes.

They say that Luise Rainer won the Oscar in “The Great Ziegfeld” for this scene:

Luise was born in Dusseldorf on the 2nd of January 1910, which means that surprisingly she is 102 years old this year, a fact that converts her into the oldest prizewinning actress with an Oscar. Discovered at barely 19 years of age, when she worked in a play in Vienna, by an MGM talent spotter, she signed a 7 year contract with the American producer yet didn’t manage to fulfil it. She worked for MGM during hardly four years, between 1935 and 1939, managing to win two Oscars in that short period of time, a total achievement that no other actress has managed. Luise Rainer isn’t the type of actress easy to find. She is from the same line as Hepburn and Garbo, another two great actresses who challenged the complicated world of Hollywood. Rainer hated publicity as much, or even more, than Garbo and her rebellious and non-conventional personality was very similar to Katherine Hepburn’s. To this she united her inability to adapt to the Hollywood rules. She used to go out on the street casually dressed and without any make up; she was also reluctant to attend parties and big events.

It is for these reasons that MGM undid themselves of her within a short period f time; or rather she undid herself of MGM. She swapped Hollywood for Broadway and returned to the theatre. However in 1945 she once again found herself living in Europe and she has now been living in Eaton Square in London for 50 years, in an apartment that once belonged to Vivien Leigh and in which one can breathe an authentic English air. Her last public appearance was in Berlin in October 2011, in a tribute that was made for her and in which they awarded her a star in a new “Boulevard of Stars”, similar to the Hollywood Walk of Fame, which they have inaugurated in the cited city. Her face was able to transmit a playful beauty, with moving eyes and full lips, a face capable of stopping the beating heart.

Luise Rainer once said: “An Oscar isn’t a curse. The curse is that you win an Oscar and think you can do whatever you want.”

Our March “Vintage Icon” is a true Hollywood rebel, who walked down the red carpet like an authentic star 75 years ago.