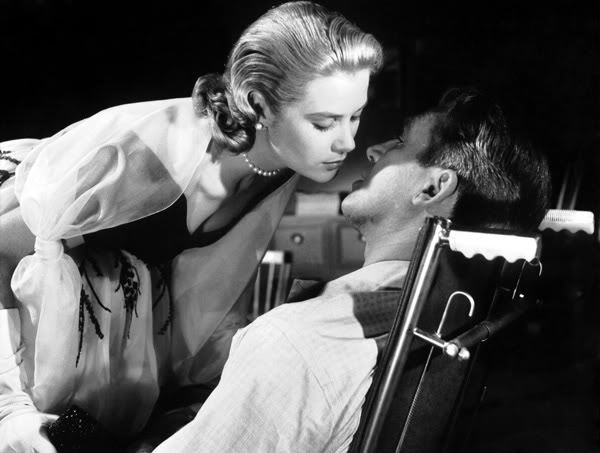 The film was nominated to four Oscars: Best Director, Best Writing, Best Cinematography and Best Sound, and also won many other awards we invite you to check in the IMDB website. A patio and an appartment. That’s all Hitchcock needed to film the movie that many think it’s the great British director’s best seller. There’s even more. The main character has his leg in a plaster and can barely move during the entire film.

Grace Kelly, our protagonist this week, is breathtaking with that black dress. That image became one of the most famous of the actress. Although the role she plays is not essential, the light she radiates with her only presence, the way she moves and how she went to the camera looking at the viewer stright in the eyes made her enter into the Olympus of gods in cinema.

Alfred Hitchcock was trully in love with her and that’s something you can perceive in this movie. The camera loves her and she enjoys it.

On the other hand, James Stewart grabbing his camera from a wheelchair keeps the audience engaged all the time, looking forward to the ending that is resolved the “Hitchcock way”.

This is a unforgettable movie that this week opens our week until the exhibition Jewels of the History, based on those that the pretty Grace Kelly wore.