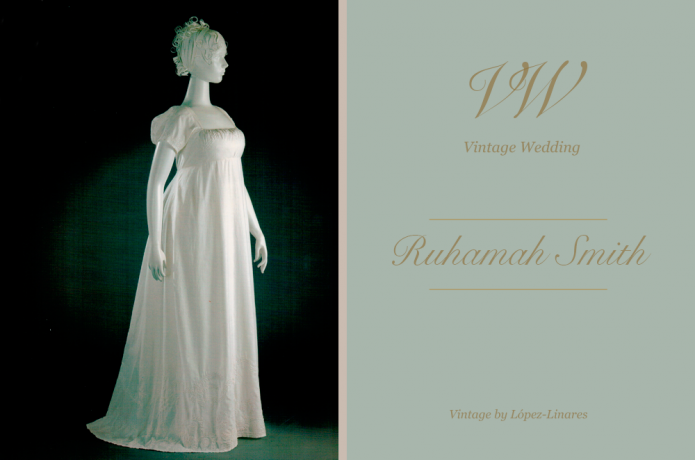 Ruahmah Smith from Worcester got married with James David Jr in September 1801, in Massachusetts.

In her simple wedding dress can be seen traditional details from the time. The skirt is a little tidied up in the back. The edge of the bodice draws the shoulders backwards and push the breast onwards. Although the piece seems to be light and comfortable, the fact is that it forced an uncomfortable posture. The gown is embellished with a beautiful brunch-shaped embroidery.

By mid 18th century, the Discovery of the Roman ruins in Herculano started a period of interest for classicism.The concern for the perfect beauty, a Greek and Roman old idea, inspired the rejection of the over decorated things. The fashion was then stark geometrical shapes. Actually the dresses were similar to Greek columns. The high waist pushed up the breast. The favourite fabrics were white cotton and linen, because of their simplicity and the similarity to the marble sculptures found in the ancient ruins. The last years of the century came marked by the French Revolution, which influenced the fashion of the time. The perfectly organized dresses worn by the aristocracy were banished. Instead a fashion style based on classic dresses that let the body be revealed was born.

About Ruhama and James we only know a very few more things: they had two children, James and Rhama. Their descendants prospered and stayed in the area.

Ruhama and James’ granddaughter Ada M Davis was married near Worcester too in 1874.