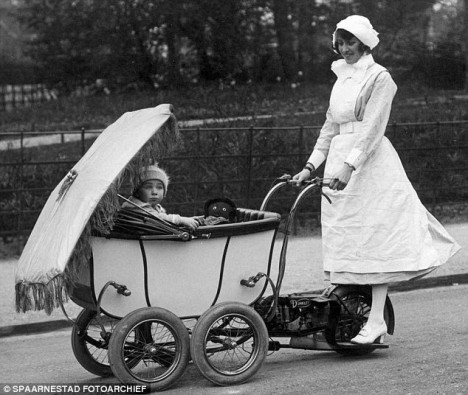 The amount of curious things that one can find whilst surfing the internet one afternoon is incredible.

The other day, without even having to go anywhere, I came across these curious photographs at which I couldn’t help but laugh out loud. Who would have thought of such a barbarity?

You would be called crazy at the very least if it would occur to you to present such an outrageous idea in the registry of patents in the Twenty First Century!

It was called the “Pramotor”. A motorized pram designed so that the nannies living in the Twenties didn’t have to push the heavy baby prams around the streets, which were rather poorly paved at the time. The contraption was designed to join onto a normal pram. It was made up of only one wheel and was built by the Dunkley, the British motor company inBirmingham.

The curious machine came out in 1923, and along with it the English motor brand would manage to go down in history. The first machines were started up by a lever, which meant that the nanny had to jump frantically whilst hoping and praying that the machine would start up on the first go. They were designed with a 1 CV potent motor (so that you get the idea a Vespino has 2 CV) and only one gear. Once the motor is started up, the noisy machine’s frenetic advance was controlled by a handlebar screwed onto the stroller with a hand controlled clutch.

However, the story doesn’t end here. In 1924, and acting in an even more imprudent way, Dunkley introduced a 2 speed version.

With this small contraption mothers could enjoy a day with their youngest without the effort of having to push the heavy and awkward pram. A whim that put the transported baby’s life in serious danger; the baby, of course, had no helmet, no safety belt and no security system.

Had there been the minimum consideration given to the driving and road safety of the “Pramotor”, the pram would never have emerged in public. However thanks to the freedom to willingly innovate potentially dangerous contraptions at the time, people paid between 40 and 135 guineas for the Model 20 Dunkley Pramotor.

I can be sure, however, that the children had great fun…

Here is the link to the original article: