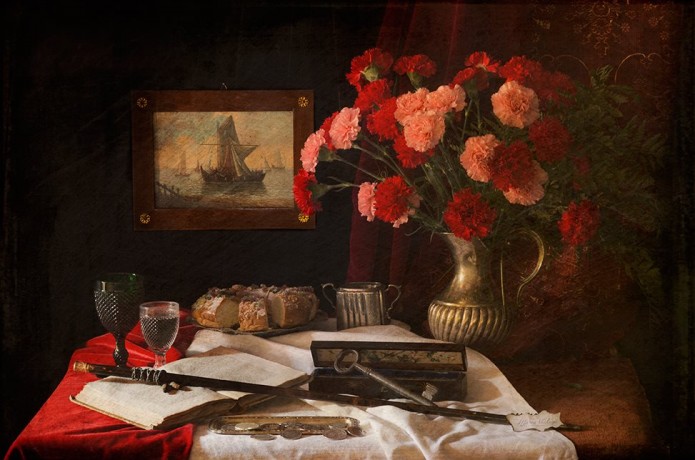 A Still Life is the modern name for the “dead nature” art: a painting or a picture that represents animals, flowers and other objects that may come from the Nature (fruits, groceries, plants, stones or shells) or built by the human being. The purpose of this part of Art is producing an effect of calmness and confort by using a special composition and playing with lights.

And this is exactly what I’ve decided to study this year.

The still life paintings have a long story behind, since the Egypt era, when they were used to decorate tombs. The Egiptian’s believed these groceries would be real beyond life. Later, Plinio the Old painted animals and shoe shops, barbers or other kind of places. That’s why he was called “the artista of the common things”.

We also find still life art in the old Rome, in mosaics from Pompeii, for instance. During this time it was a tradition to use a skulls in paintings as a symbol of mortality and fugacity.

From 1300 onwards, Giotto and his supporters resumed the still life through religious paintings, although it was a minor habit until the Rennaissance.

With Leonardo da Vinci, the still Life art was separated from the religious meaning. Leonardo studied the Nature through his watercolor system. Jacopo de’ Barbari stepped forward with his Partridge, gauntlets, and crossbow bolt  (1504). Religious relations had already been diminished in size.

During the 16th century the interest for Nature considerably rised including great spreads of still life material with figures and often animals, due to the New World disconvery. Natural objects began to be appreciated as individual objects of study and collections.

In the 17th century, Caravaggio played an important role, since he was one of the first artists who painted dead nature as a Wall art. He also applied his naturalism art to the still life. His Fruitbasket (1595–96) is the first painting using only dead nature.

These artists were inspired by the Greek sleights of hands, which I’m willing to study in detail in order to try to reproduce the work with my Nikon, my illumination equipment and the many old objetcts I’ve been gathering at home over the years.

I’ll be inspired by the “vanity” painting, the one where fruits and flowers mix with books, jars, coins, jewels, paintings and devices, always accompanied by symbolic pieces. I’ll use the meaning of decadence by picturing dead nature scenes. Each month will be different, but always with a given style behind, a style and an inspiration that I won’t say until the end of the year, so you can guess.

12 Baroque still lives, 12 still even (according to how they called them back in the 17th century in the Netherlands. I rather will call them this way, instead of “dead nature”. It has a special meaning to me and gets much better what I’m lookinf for.

Many evenings studying, reading calmly and composing photographs are ahead. I’ll focus on lights and shadows. I’ll be entering in a world I love.