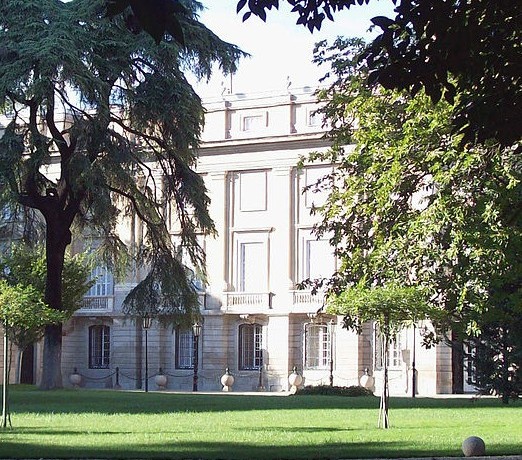 A stroll through the History of Spain

I had been waiting for this moment for nearly four years, and honestly, it was completely worth it. On Friday 10th May at 10am I had a very special appointment. I attended a guided visit round the Palace of Liria.

When I made my reservation half way through the year 2009 I never imagined that the waiting list would be so long. In March I received an email from the Patron of the House of Alba announcing the date of my visit, after so long a wait (nearly four years) I had nearly forgotten making the reservation.

I should admit that I was rather nervous throughout last week; the week leading up to my visit, anxious for the arrival of this moment and all that I would find and see on this so highly desired trip.

At 10am sharp the palace’s garden gates were opened and our guide, assigned by the patron, was waiting to receive us. He was in charge of explaining everything to us and answering all of our questions.

As soon as you pass through the doors of the palace’s main entrance you are stunned by the reception hall, the staircase, the ceilings, the sculptures and the paintings…all of these so majestic. I did not really know where to look along the route taking us to the first floor where a series of rooms awaited us, each one with a very special name. In the first room was the original and splendid armor of the Count Duke of Olivera (related to the House of Alba). It was the same one he wore when he had his portrait painted by Velazquez. It is impressive to see it shining and gleaming so much in a corner of the room.

In another corner hangs Maria Estuardo’s facsimile of her death sentence, signed by Isabel I of England. Curiously the House of Alba would find part of its family again, centuries later in 1892 through the Duke of Berwick Carlos Miguel Fitz James Stuart and Silva, as the Fourteenth Duke of Alba.

From here we pass to the “Italian Room”. Here I am able to once again admire the Fray Angelico that I had previously seen in the House of Alba exhibition in the Cibeles Palace, however, seeing it now in its original place was something very exciting. Together with it was a drawing of one of Leonardo’s disciples that not only had a notable impact on me but also delighted the rest of the visitors. Next to this masterpiece was one of the current Duchess’s favorite paintings: a small Perugino.

From here to the “Goya Room” where we were awaited by a masterly self-portrait by Mengs, a sovereign collection of Maria de Pilar Teresa Cayetana of Silva and Alvarez of Toledo, Thirteenth Duchess of Alba, completed by Goya. I had already had the opportunity to enjoy these pieces in the Cibeles Palace exhibition; however, I felt the same emotions as if it were the first time. As a curiosity, in this room appeared the Emperor Napoleon III’s office desk. During the Spanish Civil War it had passed into the hands of Serrano Suñer. Our guide told us that it had cost a lot of effort to bring it back to the House of Alba. Also in this room, which in that period was a bed chamber, the Empress Maria Eugenia of Montijo, sister of the Duchess of Alba (of that time), had died in 1922. She had donated furniture and paintings to the House of Alba and amongst these items was the aforementioned desk of her husband Napoleon III. After we moved on to the “Flamenco Room”, in which a majestic porcelain lamp by Meissen received us, acquired relatively recently by the current Duchess, it illuminated masterpieces by Rubens, Rembrandt and other famous flamenco painters. An impressive mirror hanging over the chimney also caught my attention.

We continued the visit with a walk through the hall and I did not know where to focus my gaze: chairs, tables, mirrors, clocks (all on time), hundreds of figures made from porcelain and other materials on top of the furniture… Everything was overwhelmingly beautiful. It was like taking a walk through Spain’s history dating back from the fourteenth century to the time of the House of Alba.

Our guide tells us that a clockmaker comes every week in order to wind up all the clocks in the palace and check that they are all keeping in perfect time. He also told us how one employee in the house knows exactly where each item of the house’s collection is placed. This struck me as something remarkable given the unimaginable quantity of objects. The collection of porcelains, miniatures, frames, lamps, wall lights, tapestries and carpets is astounding. I really was left speechless.

We pass through to the “Battle Room” or the “Grand Duke’s room”. Our guide informs us that this is his favorite. It is a somber, masculine room decorated in burgundy tones with an impressive gold ceiling brought from the Peñarada de Bracamonte. This room is a visit back to the beginning of the Grand Duchy. We can also admire a curious Hispanic-Flamenco panel with a figure of the Grand Duke of Alba, the third Duke of Alba, painted by Tiziano, a portrait of the Second Duke of Alba and amongst all of these a Rubens hung in the spotlight. This Rubens is a masterly piece of the Second Duke of Alba, which was at that very moment being prepared to be handed over for an exhibition in Paris. On the walls hung a fantastic collection of three tapestries from Brussels representing the battle of Jemmingen woven with silk and gold thread, the weight of gold in each estimated at about 5kg.

After that the “Spanish Room”, in which a portrait of the Infanta Margarita, one of the famous Meninas, painted by Velazquez is shown off along with a Christ by Greco, a Zurbaran, a Murillo and a Ribera. Now you can imagine how I felt upon finding myself before such marvels, I did not know where to focus my attention.

From here we pass through to the “Zuloaga Room” with the two portraits of the current Duchess’s parents and other works by the famous Valencian artist. In this room the other office desk can be found from Eugenia of Montijo’s legacy after her death, this one having belonged to Napoleon Bonaparte. They tell us that this one was found in Francisco Franco’s office in the Pardo, taken there after the Spanish Civil War. In a hearing given then, the fourteenth Duke of Alba, father of the current duchess, was believed to be the owner of the desk upon having the knowledge of a secret drawer that Franco didn’t even know existed, and that still held the Duke’s personal information held within it, enabling him to recover the desk.

We finish the walk through the rooms in the “Lover’s Room” with a pure, imperial French style decoration, Meissen and Sevres, porcelain and an impressive Louis XV furniture collection.

After we visited the dining room from which we could admire the beautiful French style garden, we finally came to the “Ballroom”. The walls of this room are taken over by two tapestries of Eugenia of Montijo and Napoleon III. Here we finish our visit. Nearly one hour that I will never forget.  Later I took advantage of the five minutes that they allowed us to take a couple of photographs of the garden, and of course, the front door knocker. Unfortunately, however, I accidentally deleted all the photographs from this day and consequently I am unable to leave you with a single testimony of my visit.

The visit id free and although you never know how long the waiting list will be, I can assure you that it is completely worth it.