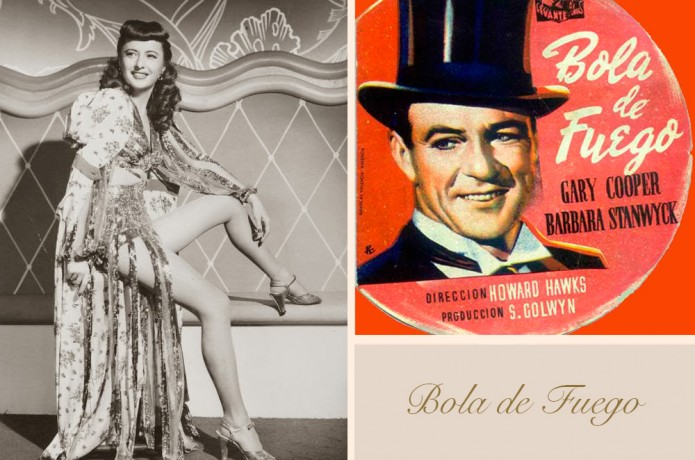 Barbara Stanwyck, the best actress never to win an Oscar, as she alone defined herself. However, she did win an Honorary Award from the Academy in 1982.

With a chameleonic capacity, Stanwyck once more showed that she could play all sorts of parts, from the most dramatic, in this case, to the craziest comedies.

Gary Cooper, in his role as a good person which gave him so much success, shows once again that he will be sure to triumph in any film that crosses his path. Both actors are magnificent. Stanwyck in the uneducated, ordinary and sexually liberated role of a chorus girl, in the hands of a mafia man who believes her to be part of his property, and Cooper as the shy Professor Potts, totally absorbed by the vulgar charms of Sugarpuss, and ready to follow her to the end of the world.

It is a beautiful film, keeping in line with the master Hawks’ mad comedies. The “yum, yum” scene, in which Stanwyck has to climb upon a stool (Barbara Stanwyck measures 1m 65cm, whilst Cooper reaches 1m 90cm) is absolutely charming.

The entire team’s roles of obsolete and charming professors who accompany Gary Cooper in the making of the encyclopedia is masterly.