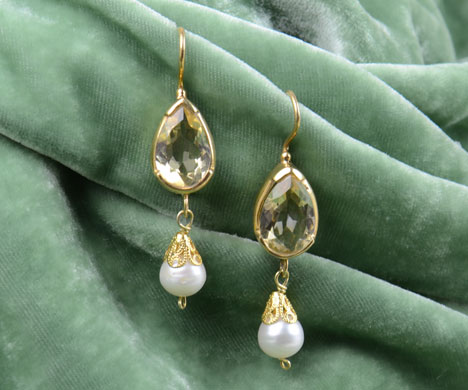 These earrings arrived to our space by pure coincidence; however I fell in love with them as soon as I saw them.

The elegant tone of their quartzes and the small hanging pearl inspired me from the first moment.

I immediately started to look for information about the first owner of this delicate piece, it didn’t take me long to find her: Bia Di Medici, also known as Bianca.

When I saw Bronzino’s portrait of her for the first time, I wouldn’t quite know how to explain the sensation that it caused me to feel. My first surprise was when I found out that the painting was of a little girl. A girl, little more than 5 years of age, who displayed an unquestionable beauty and sweetness, also transmitted something to me that was slightly disconcerting. I found her gaze to be so cold and distant…

It is very curious because the day that I started to write this entry, a great friend came to my house for coffee and I showed her the portrait so that she could give me her opinion. As she happened to be a painter herself, her opinion seemed all the more specific. And it was to my surprise when I found out that the portrait stirred disquietude in her as it had done in me.

As long as I didn’t know Bia’s story, I wasn’t capable of understanding why this portrait, being of such incomparable beauty, disconcerted me so when looking at it.

I wanted to ask you a favour. Stop for a moment at this work of art. Feel for a few moments what it is that Bia transmits to you… and then, continue reading. The story of Bia, although sad, was developed in one of the most luxurious and refined homes of sixteenth centuryItaly.

Illegitimate daughter of Cosme I of Medici, she was born when her father had scarcely reached 18 years of age and had not yet married. Bia never lived with her mother and we don’t even know who she was.

Soon after her birth she was taken toFlorenceto live with her father, knowing that Cosme I always felt a special predilection towards her, spoiling her and giving her all the whims that she fancied.

The happiness of both lasted very little. Cosme I contracted marriage with Leonor of Toledo – those of you who follow my blog will remember her: “One broach and two Leonors” – Leonor demanded that the girl be moved immediately to “Villa Di Castello” where she would live with her paternal grandmother.

Bia shared these years in the palace with Giuliana, illegitimate daughter of Alexander of Medici and who was scarcely two years older than her. The girls shared games and antics and they were the joy of their grandmother, until in 1542 both of them became sick with fevers. Cosme I demanded that he be informed daily about the status of the young girls, unfortunately however, after only a few days Bia passed away. She was only 6 years old.

Cosme I immediately ordered a portrait from Bronzino, who was a renowned artist at this time.

What impressed me was when I found out that Bronzino painted this beautiful panel from the funeral mask that they had obtained from Bia after her death. Bia never posed for the great artist. In this moment I understood why the portrait had disturbed me so, and why Bia’s gaze had seemed so cold and distant.

Cosme I never managed to get over the loss of his first daughter. It is because of this that the portrait remained in Cosme’s private gallery for so many years, for his personal contemplation and in order to keep her alive in his memory.

Despite the sad story of little Bia, the earrings still seem beautiful to me. I think that Bronzino chose this piece of jewellery for its delicacy and simplicity. When I see them I can at least imagine Bia scampering around the porticoes of the lodges at ‘Villa Di Castello’, under the complacent gaze of her august grandmother.

The Experts say that Bronzino’s portrait is one of his greatest masterpieces.

What was your first impression when contemplating this portrait?