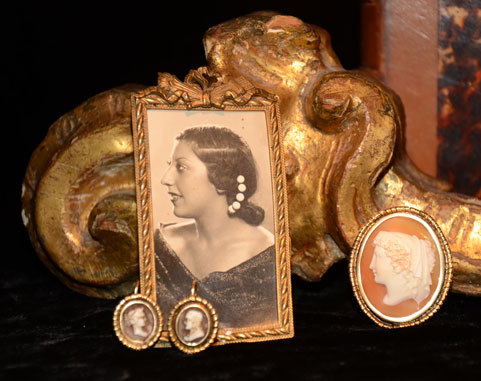 The appearance of those faces embossed over a light brown tortoiseshell has always grabbed my attention. However, it wasn’t until I married and was given an incredible set of earrings and broach by my mother-in-law, belonging to her family since 1860, that I could truly appreciate the beauty of these pieces that I had within my grasp. This set of jewellery had passed through five generations of women and now it had arrived in my hands, to my great surprise and emotion.

I found it so curious that the faces on the earrings were facing one another! I asked myself what the origin could be, or how a technique so old could continue to capture the attention of so many women throughout history. (Personally, they inspired me).

Have you ever asked yourself where these cameos appeared for the first time, or how they were made? These are some of the questions that I asked myself when I had these earrings in my hands.

According to the dictionary, a cameo is simply, “an embossment obtained from a precious stone”. Yet for me, it is a lot more than only this. It is incredible to think that the procedure with which they are made was already employed by the ancient Greeks whom, in their time, had taken it from the Persians during the incursions carried out by their armies under the command of Alexander the Great.

Later on the technique arrived in the hands of the Romans, who used it for decoration and jewellery. Needless to say that to find a piece from this time is very rare, as seen as they only appear in highly specialized auctions. For example, we know that nobles frequently wore rings with cameos, made from (not too big) emeralds and rubies. We also have to our knowledge that the Roman emperors frequently used them as badges on their clothes. Can you imagine Octavian Augustus sporting an agate cameo on his imperial toga…? Is it not incredible!?

At the end of the second Century d. C. this fashion disappeared, and many years passed until this technique returned to dazzle in the Italian Renaissance in the hands of the greatest collectors of the time, such as Lorenzo De Medici. Its influence was even seen to arrive at the French court, where Francis I displayed pieces of this type on numerous occasions. Of course, it also arrived inEngland, where Henry VIII, in his passion for these types of jewels, created his very own workshop in order to make them. During this period, antique pieces of jewellery from the Roman times were frequently sought after and they were transformed in order to make them into the most fashionable jewels of the moment. Due to the Roman pieces being mounted over very simple gold bases, they were usually dismounted in order to use them at a later time for bigger broaches; mounted over precious stone and gold bases, to decorate velvet capes and hats or to show off the neckline of some great lady of the court.

At the root of the Discovery of America, a great deal of more exotic materials entered into Europe to make the mentioned pieces, such as tusks, jade, amber or giant shells. However the industry’s most important discovery was the Tuberous Cassis shell. These shells were extremely adequate for the job, as seen as they already consisted of layers of various different tones and colour, this allowed profound and transparent embossments to be made that had been unknown until this moment. The technique was developed inItaly, or more concretely inSicily, but from there it passed rapidly to the area ofNaples, spreading itself promptly throughout the rest of the country. In a few years many Italian artists started to work inFrance andEngland, distributing this practice rapidly throughoutEurope during the sixteenth and seventeenth century. Reproduction of a Victorian necklace with a mother of pearl Cameo.

In the Napoleonic period the cameos were mainly decorated with neoclassical elements, frequently displaying mythological subjects or representing philosophers, emperors or nobles and other characters from the clergy in the Roman times. The surrounding frames, usually made from gold, were an achievement of fineness and exceptional detail known as the Roman seal setting. These cameos were often mounted in bracelets with three or four little pendants that were known as ‘slaves’.

The cameo’s fame spreads throughout the most popular social classes thanks to the fact that the “shell” was a material much cheaper than those that had been used up till this moment; this popularized its use and production, limiting the privilege to wear the precious stoned cameos to high society.

For me one of the most beautiful European royal tiaras comes from this period: “Josephine Bonaparte’s tiara”, which we were able to see displayed by the Princess Victoria ofSwedenon the day of her wedding not long ago. A spectacular piece with a matching set of earrings that were sported with a breathtaking simplicity and elegance.

Thus we arrive at the nineteenth Century; the period to which the set belongs that was given to me. It is from this period that the most records and heritage have remained with us, as seen as numerous workshops were proliferated, as many inItalyas inFranceandEngland, in order to make the cameos in “shell”. However, materials such as Onyx, lapis lazuli, coral agate or ivory were also used. These were more expensive so they were used in lesser quantities. Reproduction of earrings from the Baroque period.

During the twentieth Century, cameos made from paste and crystal were proliferated. The production of standard gold 9 carat cameos or silver with marquisate were also very common.

In the shop, we have focused on the reproductions in silver gilt. This way it will make it easier for you to find earrings or a ring inspired by the Roman style mounts. Or perhaps a silver gilt broach with a set of earrings in the purest Renaissance style.

I love the Victorian style lace necklaces with cameos and pearls. This being one of the other areas in which we have specialized.

In the photographs illustrated in this article, you can appreciate some of the pieces that we have in the shop at the moment in greater detail.

I have the great luck to be able to wear, at special occasions, these earrings and broach that were given to me by my beloved mother-in-law, which you can also see in one of the photographs that I have attached. And what do you think? Do you like the cameos?

Can you imagine yourselves as Anne Boleyn, displaying earrings of this style?

Or perhaps you are more inclined towards the velvet and lace from the period of QueenVictoriaofEngland?