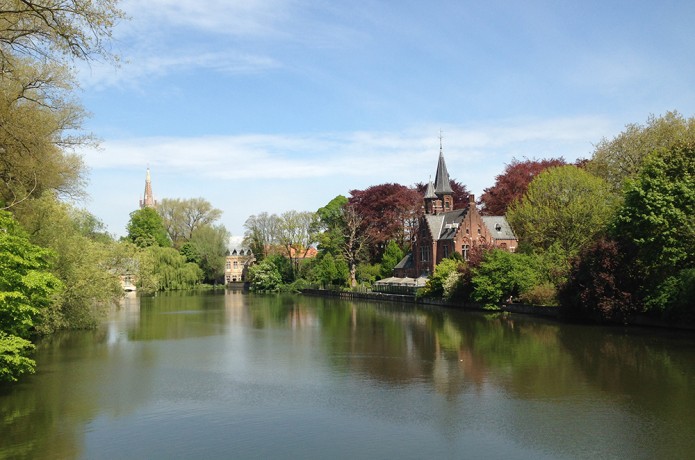 Its name comes from the Flemish term “brugge” which means “bridges”, in plural, since there are many of them completing the appearance of this small Belgian city near Brussels (around 100 kms away). Its roads hide a mysterious and charming spirit that you just can’t let pass.

Walking through Bruges is like living inside a fairy tale from the Middle Age with those little houses with North European tile roofs, romantic corners, windows with laces in the curtains (they are well-known artisans) and gardens plenty of flowers… Of course I can’t forget about that especial smell to vanilla and chocolate that hits the tourist all the time.

Because two in three businesses in Bruges are chocolate factories. At making bonbons the are truly experts. There are both those small and traditional establishments tempting the visitors with a delicate aroma and those more innovative like The Chocolate Line, one of the three unique chocolate factories in the world that was included in the Michelin Guide. By the way, for the cuisine lovers, this is the sixth city with more stars per capita in the whole world, right after Kyoto, San Sebastian (Spain) or Bergamo. It is considered the medieval city best well maintained in Europe. The historic city center was declared a World Heritage site by UNESCO back in and it’s set up around the Grote Markt. Right there you’ll find the Belfort tower with wind chimes of 47 bells. It was all of a survivor after get beyond several fires and rebuildings. Although the entrance has 366 steps, the effort is really worth it because of the outstanding views up there.

Near you’ll find the church of Notre-Dame Bruges. Its architecture is Gothic and within its walls preserves the only Michel Angelo’s statue that traveled out of Italy during the artist’s life; a wonderful madonna in marble that was first pillaged by France during Napoleon war and then sacked again by nazis during the II World War. Nowadays, Bruges neighbors guard it very carefully. However the most recognizable image in Bruges is Rozenhoedkaai (also hard to pronounce). It probably was a quay where dealers loaded and unloaded their goods. Today that place is the most photogaphed in town. From here you can take a small boat and go through the channels in order to see a different and charming view of the town.

Other of the main points of interest is the Minnewater or the Lake of Love that hides mysterious tales. It says it harbors in its bottom a lady’s tomb who preferred to die rather than to marry a man she didn’t love. Other legend is about Maximilian of Austria who “punished” Bruges’ residents to maintain the  swans in the town forever.

And after the sunset a mild fog covers the city and its roads are lighted up with faint flashes that are reflected over the river… And then the magic is even more realistic than ever, more tangible. Get lost within its paving streets because maybe, as in a tale, anything could happen.

“Post written by Maria Cereijo, Journalist and Writer. Find her on Twitter @capitulosiete or as a juvenil authour @LabAmy
Pictures by @Maria Cereijo