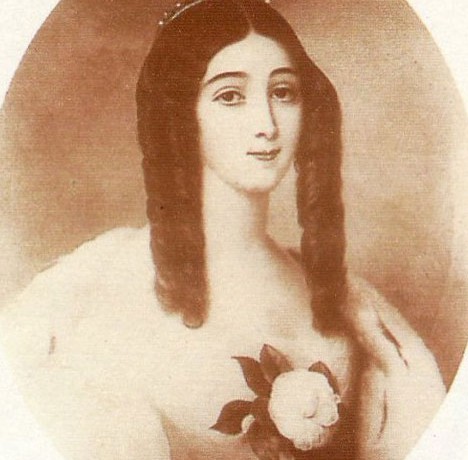 “Camille”, the film directed by George Cukor and whose lead actors are the Swedish Greta Garbo and the North American Robert Taylor, will be our January 2012 “Vintage Icon”.

We have chosen this film as seen as on the 22nd of January it will be the 75th anniversary of its premiere in New York City; it is based on the French writer Alejandro Dumas’ (son) novel.

What I’m not sure if many people know is that the Alejandro Dumas’ novel is inspired by his own life, and that Margarita in reality is Marie, the well known writer’s lover of nearly one year. The novel was a posthumous present that he redacted for his loved-one. Marie was the daughter of a peddler and a lady of aristocracy who lost nearly everything during the French Revolution. The courtesan was abandoned by her mother when she was a small girl of barely 4 years of age, remaining in her father’s care who, when she was barely 12, offered her to the neighbours in the area as a prostitute.

She arrived in Paris with barely 16 years of age by hand of a gypsy family, managing to get work in a vegetable shop, an umbrella factory and later in a lingerie shop. However, immediately, and thanks to her incredible beauty, she managed to bewitch a great number of men.

Her first great conquest was the Duke of Gramont, who would end up as the Minister of Foreign Affairs with Napoleon III. He installed her in one Paris’ most luxurious flats and put himself in charge of paying for a tutor to form and convert her into a great lady.

She would refine herself with her tutor, learn to write, have a correct French pronunciation, and play the piano and dance, at the same time as acquiring literary notions, history and protocol. When the Duke’s family found out, they forced him to break off his relationship; however Marie was already famous in the Parisian circles and men fought to share a soirée with her. Afterwards there came a number of famous names of the period; men with money, a high social and economical position, all noble and ready to attend to her innumerable and costly whims.

As a member of the elitist Paris Jockey Club she would meet the Count of Perregaux in 1841, the Count would end up in ruin and abandoning her, unable to maintain the lifestyle that Marie desired.

In 1844 she met Alejandro Dumas. In this period Marie was already suffering from tuberculosis, and although the romance lasted for nearly a year, the writer abandoned her in fear of catching the feared disease. Nevertheless, the writer would write her this farewell letter, by which he could give the sense that his decision to leave her were due to other motives.

My dear Marie, I am neither rich enough to love you as I should like, nor poor enough to be loved by you as you would like. There is nothing for us to do but forget — you a name which must mean very little to you; I a happiness which is no longer possible for me. Needless to tell you how miserable I am, since you know how I love you. So, this is goodbye. You are too tender hearted not to understand the reason for this letter, too intelligent not to forgive me. After another one or two romances, Marie, ill and abandoned by all would end up marrying the Count of Perragaux, converting her into a Countess and caring for her until the day of her death, which took place only a year after her marriage.

In 1848, little after a year of death, Alejandro Dumas (son) decided to immortalize Marie by writing the famous novel in her honour.

In 1853 Giuseppe Verdi launched his famous Opera the “Traviata”, base d on the cited novel. The opening was in Venice and turned out to be an authentic failure. A year later it was re-launched with a few modifications and made a resounding success.

The first time the novel was taken to the cinema was in 1907. In 1921 a version with Rodolfo Valentino and Alla Nazimova as the protagonists was made. After which, there were many more versions, ballets, theatre productions and some television series. However I definitely choose Greta Garbo’s marvellous interpretation and beauty. Her role of Margarita Gautier won her an Oscar nomination for best supporting actress in 1938.

During the whole month of January our “Vintage Space” will be dressed as Greta Garbo and her Camille.

We’re waiting for you!!