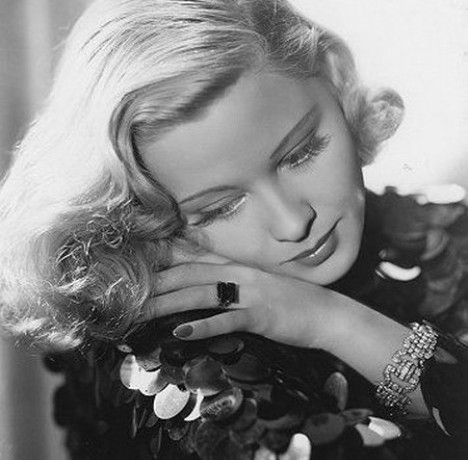 Mary Carlisle… February 2012’s “Vintage Icon”. The beautiful American actress was born on the 3rd of February 1912, meaning that today is her 100th birthday. We wanted to pay her a small tribute from here, on the day of her centenary.

Mary arrived in Hollywood at the early age of 4years, accompanied by her mother who was recently widowed. She was discovered by Carl Laemmle Jr. in the Universal Studios dining room and underwent her first test shoot.

She was given her first role at only eight years old when she interpreted Jackie Coogan in “If I were King”.

In 1933 her first great opportunity arose upon being selected as one of the young “Wampa” girls. “Wampa” was a promotional campaign for the Western Association of Motion Picture Advertisers. It consisted of selecting 13 young actresses on their ways to stardom. The competition continued to take place between 1922 till 1934. The annual awards were celebrated in a big party called the “Wampas Frolic”, and the winners received a mass promotion to help their careers take off.

In the image of the “Wampas Girls” in 1932 we can see Mary Carlisle (sat in the first row) and next to her Gloria Stuart (who recently passed away and who starred in Titanic as the elderly Rose) and Ginger Rogers.

Mary had started her career as a support actress in the Thirties. She was selected as Bing Crosby’s co-star in the three of her first musicals: “College humour” in 1933, “Double or Nothing” in 1937 and “Dr. Rhythm” in 1938.

Link to the film: Dr. Rhythm

For me, she plays one of her best parts in this last film. The very famous actor Bing Crosby dedicates a beautiful song to her.

In 1931 she placed a small role in the successful film “Grand Hotel”, in which she gives life to a youth on her honeymoon and although the role was small, the film was a success and managed to win an Oscar for best film in 1932. In the film she shares star-studded moments with Greta Garbo, John Barrymore, Joan Crawford, Wallace Beery and Lionel Barrymore. Mary appeared in nearly 70 films during 1930 and 1943; she retired when she noticed that her career was no longer heading in the correct direction, and she concentrated on her marriage to James Blakeley, another young actor. The two actors met each other whilst filming a Bing Crosby musical together. Mr. Blakeley managed to get a greater success later in the 20th Century Fox studios. The happy couple remained married until James Blakeley’s death in 2007 and had one son together.

After retiring she dedicated a few years to managing an Elizabeth Arden salon in Beverly Hills, California.

I have tried and failed to find some kind of current information about Mary: where she lives or what she does now… I haven’t been able to. I would love to hear the stories that Mary tells about her Hollywood days in the Thirties. What I know for sure is that she is the only 1932 Wampa girl that is still alive and that in 1960 they dedicated a star to her in Hollywood’s famous “Walk of Fame”.

From Vintage By López-Linares, wherever you find yourself, we wish you a very Happy Birthday Mary…