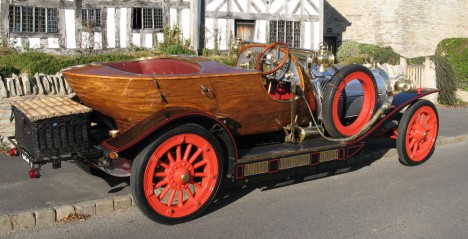 If there is one film that continues to excite me and that I always look forward to seeing over Christmas (as I think they repeat it every year) it is “ChittyChittyBangBang”. It brings back an infinite number of childhood memories to me and I feel it’s one of those films that marks a before and after, not only in great musical and cinema history but also in the life of a young girl barely 7 years old.

Curiously when I told Angel that I wanted to write about this film and the car that starred in it, I was surprised by the fact that my nephew Angelito, roughly the same age as I was in this moment of fascination, was in love with not only the song and the film but also knew that the car was to be auctioned. Knowing this, he had begun to insert all his coins into his piggy bank in order to save and bid for the car in the auction.

It is estimated to reach about 2 million dollars in the auction.

You will have to save a lot Angelito! It’s a lot of money. However, what would be easier is a trip to the USA to see the car with the money you’ve saved up, given that is the place where it is to be found.

Various ChittyChittyBangBang cars were produced for the film, however only one managed to really work. This very car is the one that had remained in the hands of its only owner: Pierre Picton in Stratford-upon-Avon, until only a few months ago when he decided to put it up for auction. The vehicle was boarded in England and taken to California in May 2011, although I haven’t yet managed to find out the exact date that the auction is to be celebrated on. I am going to continue investigating because I would love to follow it live.

The star of the film, which was released 44 years ago today in 1968, is a vehicle designed by Ken Adam and built entirely by hand in the Ford racing department. It has a polished aluminium bonnet, a cedar wood interior, brass ornaments and its dashboard: the remains of a British First World War fighter plane, all this makes a most original and charming car. Chitty was finished in 1967 and was registered as “GEN 11”. This was meant as “genii” (genie), thus giving the car a magic and slightly human personality.

I don’t think that any of us who saw the film during those years would forget the main character, Dick Van Dyke, who gave life to an eccentric inventor that takes his sons on the biggest adventure of their lives.

The film, based on the novel by Ian Flemming that he had dedicated to his son, was filmed in England, France and Germany during 1967 and 1968, and was released on 16th December 1968. It was one of the most difficult and expensive films made of its period.

“ChittyChittyBangBang” was a huge success, and although its profits didn’t turn it into a box office hit (due to its extortionate cost more that a lack of spectators), for me it will always remain in my memory as one of the most charming films ever; one of those movies that I would love to continue enjoying with my grandchildren.