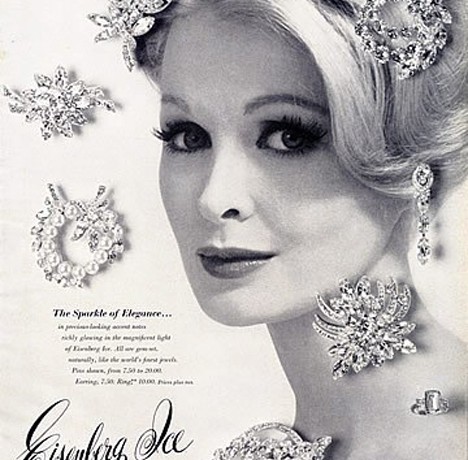 The Eisenberg Company was founded in Illinois, Chicago, in 1914 by Jonás Eisenberg, an Austrian immigrant who arrived to the United States around 1880.

At the beginning the company only produced high quality women’s clothing; however every one of its dresses came accessorized with a very special piece of costume jewellery. These accessories were brooches hand sewn onto the dress by the company with Swarovski crystals imported from Austria, as well as rock crystal and fake pearls.

The idea was a novelty at the time and managed to change the company’s history.

This detail, which every one of its designs included, created a different look to the rest of the dresses that were being sold at the time, and before long Eisenberg’s designs were nearly more famous for the accessories that they sported than for the actual model itself. His brooches were so sought after that people started stealing them off the clothes. The clients wore the dress’s brooches to show them off on their own pieces of clothing.

This made the company rethink certain things, finally leading to Eisenberg’s first collection of brooches in 1930. Soon after, the collection expanded and started to include necklaces, bracelets and earrings.

Eisenberg has never been a cheap brand. Its pieces have always been distinguished for their quality, design and high price. In the Fifties the prices for the pieces of jewellery were already marked around 10 to 30 dollars.

The first collections of the “Eisenberg Originals” were great designs and loaded with stones. However, in the Forties, due to a restriction on metals during the war, Eisenberg used sterling silver and the pieces became lighter and more detailed. There were rumours during wartime that the diamonds were smuggled into the United States, hidden as precious stones from Eisenberg jewellers, yet this has never been proved.

From 1940 to 1972, Ruth M. Kamke was the chief designer. She practically created all the pieces from the “Eisenberg Ice” and “Eisenberg Originals” brands.

Eisenberg designed so many necklace, earring and bracelet sets in the Forties that they currently reach extremely high prices on the Vintage market.

His motto during the Forties:

“The jeweller’s of the future, so clear and radiant like an iceberg under the light of the sun.”