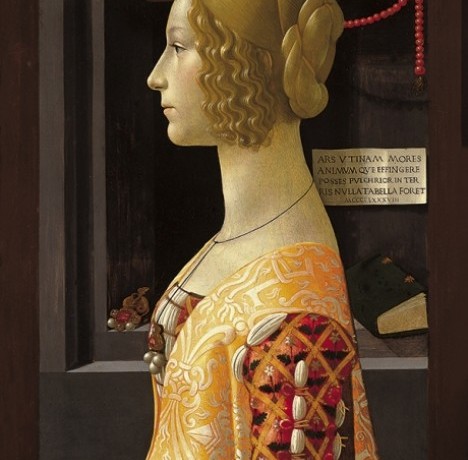 To know of all the misadventures and paths that a portrait has passed through during the last 525 years is not by any means simple, but in the case of this extraordinary work by Ghirlandaio we are more fortunate. We know of all the journeys that this masterpiece has made due to the fact that they are all perfectly documented. I assure you that it has been more than exciting for me to follow his clues all over the world.

It remained in the Palazzo Tornabuoni in Florence, its first home, until it passed into the hands of the Pandolfini family. Later it formed part of Princess Sagan and Baron Achille Seillière’s Collection in France.  We know that in 1878 it was found in Brighton in Henry Willet’s collection, and that at the beginning of the twentieth century it was in the hands of Rudolf Kann. However it didn’t last very long with Kann as seen as in 1907 the American millionaire J. Pierpont Morgan, the founder of the J.P. Morgan bank and one of the most important art collectors in history, obtained the masterpiece. It is said that his desire to possess this art work was due to the memory of his first wife’s youth and beauty that the painting inspired, she died of tuberculosis at a very young age when they had been married for just under four months. The image that is shown by the painting is from this period, here we can appreciate the painting exhibited on an easel in the entrance of a grand living room and surrounded by other great works of art. The room is the “West room” of 219 Madison Avenue, the Morgan family’s home in New York. Following J.P Morgan’s death, his son sold the painting in 1935 together with the other pieces from Baron Tyson’s collection, the father of Carmen Cervera’s husbands.

Baron Tyson brought it back to Europe where it remained in his favourite villa for many years, one of the Baron’s residencies in the city of Lugano (Switzerland). I can’t even imagine the sensation that you would have to feel on entering the living room of your house to find yourself face to face with a similar marvel… But who was Giovanna? Her unmarried name: Giovanna degli Albizzi, the eighth daughter of a Florentine trader who, madly in love, married Lorenzo Tornabuoni on the 15th June in 1486. This was something relatively unusual for the period, in which marriages were made for convenience and not for love. Her wedding lasted for three days, full of parties, dances and banquets, being one of the most documented of the time. We know that Giovanna was married in white showing off a splendid hairstyle with costly adornments. She arrived at Palazzo Tornabuoni accompanied by her father where she was received by her father in law. The guests were made up of the Florentine cream of the crop. The guest of honor was: Dn. Iñigo López of Mendoza, Ambassador of Spain.

After the banquet all the guests moved to the Square that was in front of the San Michele church, and there, upon a stage richly decorated for the occasion, the dance took place. The bride and groom would pass the wedding night in a room in the Palazzo Tornabueoni, elegantly decorated for the occasion. The celebrations lasted for two more days and on the second day Lorenzo de Médici, cousin of Lorenzo Tornabuoni and one of the most influential men of the time, joined the banquet. To follow there were jousts and tournaments that Naldo Naldi narrated with the luxury of all of the history’s details.

Giovanna and Lorenzo had a son straight away. However, the joy in the house would not last long. Giovanna died scarcely a year and a half later than the wedding, when she became pregnant with her second son. The loss of his beautiful wife and the son that he was awaiting left Lorenzo in desolation, it was soon after that he commissioned the posthumous portrait. This was something very usual in this period.

Giovanna’s portrait is spectacular. It doesn’t surprise me that its previous owners fell in love with her as soon as they saw her. To have the privilege to enjoy this masterpiece in your own house must be something unimaginable…

Giovanna is beautifully portrayed, maintaining an upright and confident posture and transmitting a noble pose of serenity. Her firm gaze losing itself into infinity makes us imagine that it could be directed towards a window through which the light penetrates, a light that illuminates her face, her breast and her rich clothes but that leave her hands in a soft shadow.

The great contrast of colours obtained by Ghirlandaio is impressive: the blacks with the yellows, golds, reds and oranges. At first the work was framed in gold, or at least it was indicated to be so in an inventory of the Palace Tornabuoni in 1498. It speaks of a portrait of Giovanna, hung in Lorenzo’s bedroom in a golden frame. However, the mould that currently frames it is almost black, greatly highlighting her golden hair and the red tones of her clothes.

The portrait possesses a hypnotic power… I can assure you that it is hard to take the gaze away from her. Her gaze empowers her. As it was to be imagined, my eyes went straight towards her broach: A beautiful piece of jewellery that Ghirlandaio knew how to draw with delicacy and care, hanging it over her breast by an extremely thin silk thread.

I Left the Tyson with a firm purpose to reproduce this beautiful piece that hung from her neck. This is precisely what makes me bring Giovanna Tornabuoni’s necklace to our Vintage space today.

If you live in Madrid or you are thinking about coming, make sure you set aside a moment to visit this magnificent portrait, considered to be the Tyson collection’s “Jewel of the Jewels” and one of the most emblematic masterpieces of the Italian Renaissance.