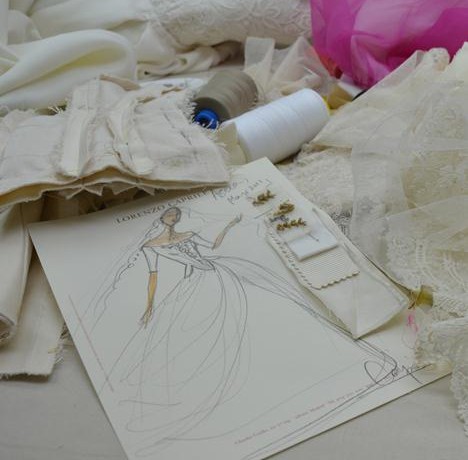 I love reading gossip magazines when they publish a cover of a famous wedding. I take my time whilst looking at the photos: the dresses, the headdresses, the bags and the shoes… It thrills me to focus on all the details that surround the ceremony. I think that the atmosphere in which the engagement is celebrated together with the bride’s dress, are the two things that most strike my attention.

Due to this, when I saw the front cover of Hola last May with Asela Pérez Becerril and Jacobo Fitz-James Stuart’s wedding, I fell in love.

When I saw this dress together with the Palace of Liria… I immediately thought of Lorenzo Caprile, his bodices are unmistakeable.

I opened up Hola, skipping through the pages (of course) until I reached page 67, where I found the complete report.

The first image that I saw of the dress won me over completely… At that precise moment I knew I was going to write about him. The “Toile” of Asela’s dress

I wasn’t mistaken; the wizard who had managed the marvellous resemblance was no other that Lorenzo Caprile. The rest was pure coincidence.

A few months after, Lorenzo’s right hand girl, Chiquín Figueroa, passed by our space. Chiquín is down to earth and upbeat. A few minutes later I found myself chatting to her, with my copy of Hola in my hand (I had it safely and well conserved) and expressing my desires to write about this dress to her.

My surprise was enormous when, after a few days, she called me to tell me that we were invited to visit the workshop, meet Lorenzo and to photograph the dress.

Our appointment (20 Claudio Coello Street): a beautiful building from the nineteenth century in the heart of the ‘Barrio de Salamanca’. Lorenzo’s workshop was overflowing, it was the end of July, and everything was being rushed to and fro. None of this flurry prevented Lorenzo and Lola from having prepared Aselas dress’s Toile for us.

Lola entertained herself by placing and arranging the bodice, the train, the sleeves, and the front gathering of the dress so that we could appreciate the piece in its full splendour. The dress’s train fascinated me.

Lorenzo couldn’t have been friendlier. We started by talking about the bride. Asela has an art gallery: Espacio Valverde. Lorenzo told me that she is a woman of exquisite sensitivity. The bride was clear about the type of dress she was looking for. The most important for her was: that it fitted in with her surroundings… nothing more and nothing less that the gardens of the Palace of Liria.

What a marvellous place to celebrate a wedding!

Lorenzo’s inspiration arrived through Asela’s favourite classical painter: Zurbarán. The volume of his dresses, the way his fabrics fell and the grandiosity of his work were her inspiration. Seventeen metres of fabric were needed. Satin and taffeta both made from natural silk were chosen, the Valencian brand “Catalá” was selected for weaving. Their experience of over more than 200 years and their magnificent weaving machines, unique in Spain, were considered by Lorenzo to be specified for such a delicate delivery. Not in vain, the silks of Infanta Cristina, the Princess of Asturias’ dress had come from their weaving machines, just like the fabric that decorated the Kennedy’s bedroom in the White House.

Who would be more capable than them to make a fabric that would seem as if it had come out of a Zurbarán painting?

It struck me greatly that Asela were to wear a ‘mantilla’ and a veil. Lorenzo explained to me that the idea was his. Asela wanted to wear a ’mantilla’ made from Brussels lace, an antique jewel of more than 2 metres of length that had belonged to his mother’s family for more than 100 years. Due to Asela wanting to enter the ceremony wearing the veil, Lorenzo decided to place the veil covering the face and the ‘mantilla’ just as the bride had dreamed.

The veil would be held in place over the head by a simple loop. Lorenzo cut the veil in such a special way that it would remain light and not take the spotlight away from the authentic jewel that dazzled below it: the nineteenth century ‘mantilla’. Lola stressed to me that the ‘mantilla’ is a jewel, one of the most beautiful and magnificent pieces that they have seen, and furthermore, perfectly conserved.

Lorenzo explained the details of the dress’s tailoring to us: The inside of one of Lorenzo Caprile’s bodices.

The border of the bodice was made by Joan Cat, an incredible artisan that has worked for Lorenzo for many years, and who bordered the entire drawing that Asela and Lorenzo had chosen by hand. A floral jewel inspired by the front of the seventeenth century dresses.

The smallest movement made by Asela would reveal the dresses petticoat, another small jewel finished off with lace edging and “valencien” lace. All of them sewn by hand.

Surrounded by patterns and rules, we enjoyed ourselves with Mar, the workshop’s manager. She explained to us, with all the luxurious details, how Lorenzo’s star piece was made… “The bodices” One of Lorenzo Caprile’s embroiderers

Lorenzo’s bodices have between 14 and 16 rods and Lorenzo says that they were the antique version of plastic surgery. With them, women were able to cover their flaws and highlight their virtues.

We admire the storeroom full of lace, tulles, lace bordering and embroidery that would provide delightful to any lover of high couture.

We saw Ana and Marian pass the lace’s designs from one tulle to the other on a bodice… This is a delicate and hard job. The lace is cut and sewn back again over the silk. All of this by hand, of course. Cutting the lace and sewing it back over the silk.

Two months total of hard work: Isabel, Paco, Fran, Nines, Marta, Mar, Lola… were some of the expert hands through which the piece passed. Each one of them put in hours of work, but over all hours of care… The workshop breathes joy, illusion, professionalism and team work, and all of this is reflected in every one of their pieces. The love and passion with which they explained every detail surprised me. A great team of professionals, of this there is no doubt. I don’t want to leave out the comments about the details that I loved greatly too: the tiara worn by Asela, a nineteenth century tortoiseshell jewel that belongs to her family; the bride’s bouquet, a small and delicate bouquet of white roses.

The most important thing for Lorenzo was that the Bride trusted him from the very beginning, and it was stressed how the chemistry with Asela was perfect from the very first moment. It is clear that they formed the perfect tandem, and between the two of them they were able to complete the dream of any bride: to be dazzling on the most important day of their life.

For me this is the most magnificent bridal dress created in 2011.

Many thanks to Lorenzo Caprile, Chiquín Figueroa and all of their team for the care with which they treated us. Our many thanks too to Asela Pérez Becerril for letting us write this report. Chiquín Figueroa and Lorenzo Caprile with Ana and María López-Linares