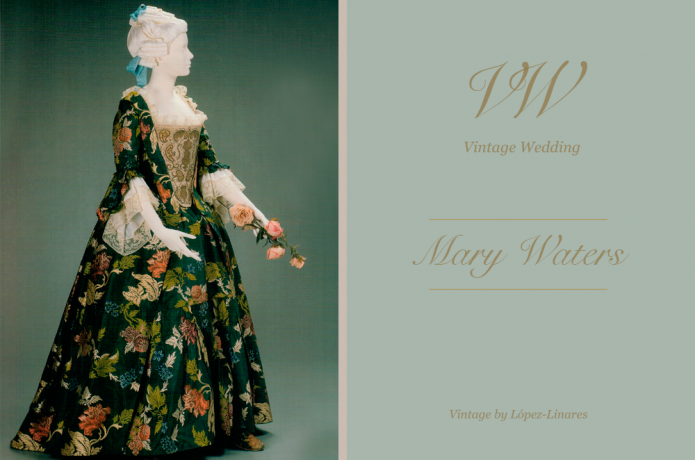 She chose a very daring wedding dress design for the time. A fascinating dress made in silk from Spitafields in green decorated with flowers in salmon, pink, golden, olive green and blue. Something definitely not usual at all back then. It actually showed Mary Waters family’s economic status when she got married with Anthony Sigourney in Boston in 1740.

Mary Waters picked this beautiful and truly expensive fabric, imported from London (Spitafields), where the most high-quality silks were made in the time. The dress was completed by a pretty front with the form of a cone embroidered with golde thread that helped embellished her figure, and also by the squared neckline with a laced flounce made of linen, the same material used in the sleeves. The skirt was huge, exceedingly bulky and with a lateral opening. It was with no doubt a very colorful and different wedding dress.

Many women used to choose the white color. Not her, because this way it was more convenient for the purpose. Any spot or stain wouldn’t be noticed, while a tiny incident used to ruin any white dress, in a time when washing systems were not as good as the one we have nowadays.

Mary Waters’ election ended up being such an investment. Twenty years after the gown was still in perfect conditions to be used by her own daughter. The history of this area of London is worth of being told. By the end of 1687, over 13.000 French Protestants came to stay as refugees in that part of the city. They started there one of the most profitable actions in the time: silk manufacture. In just a few years it became into the best business in town. Most of the women from Europe and the States would want to have one of the famous Spitafields silk.

Over the 17th and 18th centuries that area was over developed with houses and buildings to let master weavers to work from there, as well as houses of all kind like huge mansions and also smaller properties for weavers of the area. Spitafields grew very quickly.

By the beginning of the 18th century, Irish weavers arrived to Spitafields running away from the linen industry decline in Ireland. The crisis over the field in London was actually very crude along this century, due to the peak of the French silk market, a terrible competence. By half the century, weavers started fighting each other and against their managers because of the low salaries and precarious life conditions.

By the Victorian era, the silk industry had already started a long decline. Spitafields neighbourhood turned into an unhealthy area with houses that fell apart. By 1860, the customs opened and the imports from French came to stay, so many weavers from Spitafields became homeless. Some of them tried to redirect their businesses into other fields such as woodwork, but the situation was unsustainable. And the area became into one of the poorest of London.

This together with the lack of hygiene and security caused the demolition of part of this area in the 19th century.

By the end of the 20th century, from the 60’s, this area is most well-known by the capital of the curry and it’s living a new hit with new artists coming around.