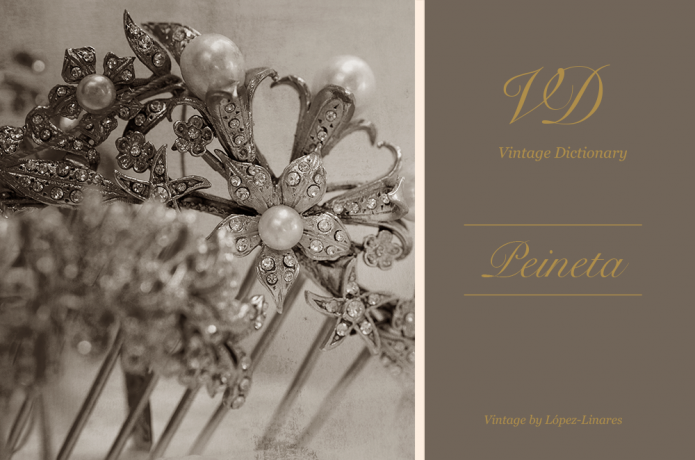 A “peineta” (the Spanish term for “haircomb”) is a female accesory similar to a comb with a convex boday linked to an area plenty of teeth. This accessory is meant to be put in place in a upsweep or low updo.

There’s proof of the use of this piece since Iberian women used it when living in the Iberian Peninsula. The flirty Roman women didn’t want to be less and also used to wear it on top of their complex and worked updo and hair braids.

Did you know they already used hair curlers back then? They were called “calmistrum” and it actually was a metal pipe that they placed over coal to warm it. Then the ointments did the rest of the work.

So yes, the beautiful Roman women used small combs to dress their hair.

The Spanish “peineta” were usually tortoiseshells. These pieces were very popular in some kind of celebrations like weddings, Holy Week processions, bullfightings, traditional parties and flamenco or copla shows. The “peineta” is the perfect accessory for the laced shawls or “mantillas” since it highlights the beauty of the embroidery.

The most common comb models have ornamental curved (or squared somtimes) forms made in shell. Most of them have beautiful miniatures on them on shell. Nowadays however is mostly made in acetate or similar materials since turtles are in danger of extinction. Today there are only very few authentic shell-made tortoiseshells left.

Even more common today is the use of haircombs in silver to decorate the brides’ updo. Those were popularized back in the middle of the 19th century.