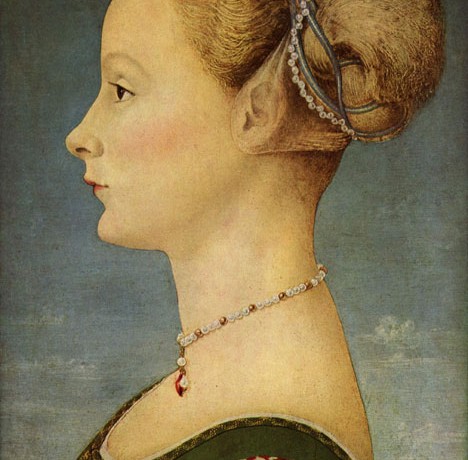 Piccarda Bueri was born inVeronain 1368 in the heart of an old, noble and wealthy Tuscan family. Giovanni di Bicci de Médici himself was one of Averardo de Médici’s five children, who upon his death left what little he had to his widow and their five children. From an early age Giovanni emerged as a skilled, intelligent and bright man in business. His uncle Vieri noticed this immediately and contracted him as his apprentice in the Medici Bank inRome.

Giovanni and Piccarda were united in marriage in 1386. A marriage out of convenience to which Piccarda brought a great dowry and noble title, and Giovanni a more than promising future in which he managed to succeed in having one of the first Italian banks.

This was how Giovanni, using Piccarda’s dowry and his rights as a business man, managed to displace his uncle at the head of the Medici Bank in Rome, converting him into the leader and founder of the Medici family, and also one of the richest men of the Italian Renaissance.

He was a reserved and thoughtful man; he was characterized by his simple way of dressing, and for his lifestyle centred on his businesses and his family’s serene peace with his dearly loved wife and his two male sons: Cosme and Lorenzo. Piccarda’s portrait was completed in the Polliurio brother’s studio; however I haven’t been able to find who commissioned it on my own accord, as it is dated in 1470 long after the marriage ended.

The Polliurio brothers were born in the city of Florence, from a very humble father from whom they received their nickname. He sold poultry, hens, (pollaio means hen house). The old Polliurio soon became aware of his son’s artistic gifts; due to this he arranged a place for Antonio in Bartoluccio Ghiberti Goldsmith’s workshop, an outstanding expert at the time, and for Piero with Andrea del Castagno the painter who was the best inFlorence at the time.

Both brothers were outstanding to such a point that after a short time they opened up their own Goldsmiths, converting themselves into Verrocchio’s rivals in very little time. The Italian Renaissance’s famous architect, painter and writer, Vasari, writes in his renowned work about biographies that the Polliurio brothers carried out dissections to improve their knowledge about the anatomy, advancing farther in these practices than Leonardo Da Vinci.

It’s hard to specify which of the brothers painted Piccarda’s portrait as they didn’t tend to sign their work, however it is believed that Antonio did it as he outshined his brother in the art of colours.

Piccarda wears a dress with a low neckline held together by a few small buttons. Her sleeves are luxurious as they tended to be on the dresses of the high bourgeoisie ladies of the time.

I like the way she wears her hair, the veil, the long string of small pearls that decorate her bun and that are hid by the various hair gatherings. It reminds me of classical ballet dancers: ethereal, elegant and with a distinguished yet distant air.

The extraordinary richness of the dress, the hairstyle and the Jewels that she wears invites us to imagine that the painting is of a prominent figure from fifteenth centuryFlorence. Everything about her reflects distinction and elegance, yet her poise is confident and simple.

The inscription on the following panel labels her as the Florentine Banker Bardi Giovanni’s wife, the work being dated in 1470.

Piccarda died in 1433, only three years after the death of her beloved Giovanni, she was buried together with her dearly loved husband in the Vieja de San Lorenzo de Florencia Sacristy. The chronicles of the period write that after her husband died Piccarda fell into a profound sadness that she never managed to get over. The San Lorenzo Basilica in Florence

Carlo Marsuppini, a renowned philosopher in his time and a man of words, wrote an ode in his memorials that compared Piccarda to Portia, Julia Cesar, Artemisa and Penelope. All of these are women remembered for love, suffering and the dedication and efforts they made for their loved ones.

Since last month this beautiful piece of Renaissance jewellery can be seen in our space inMadrid.