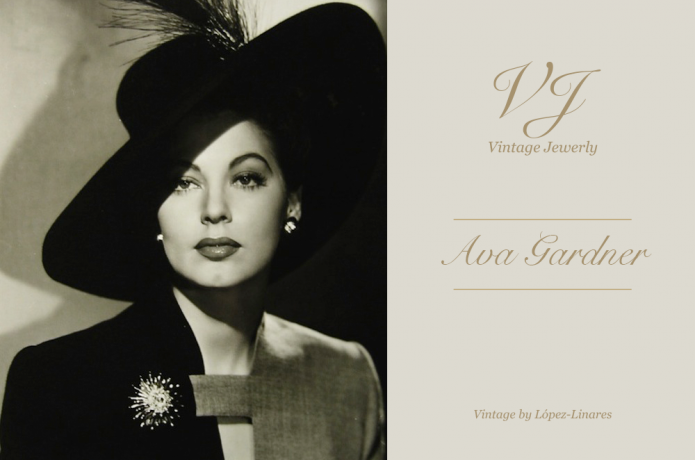 Ava Gardner was a extremely beautiful, strong and impulsive…  She also was glamous and sensuality, and over all, a huge jewelry collector.

The actress was owner of a classic collection of jewelry most of them dated in the 60’s and 70’s. The style – surprisingly – is very discreet, opposite to Ava’s character.

One of the first jewels that was gathered was the engagement ring Mickey Rooney gave to her the day they announced their wedding. That happened in a party in Romanoff. The fabulouse piece had a stepped brilliant with a weight of 6.35 carats. Other of the most emblematic pieces among her collection was a very elegant set of diamond earrings, designed with the form of a bouquet, with intercangeable pendants: diamond drops with the form of a pear, jadeite pearls, impressive drops of emerald and diamonds or pearl crowned with diamonds. In the movie The Cassandra Crossing she wore these earrings with drops of pearls. It’s such a versatile piece with a classic and beautiful design.

Ava also had in her collection a magnificent ring with a Kashmir sapphire, a gift from Howard Hughes who the actress returned it to when they broke up their relationship. A Kashmir sapphire is not a normal gem. They are the most famous and wanted sapphires in the world since they have a superb blue color that gave them the name of “sapphires of velvet”. Due to the rarity of these stones, they are considered almost mythical. Kashmir sapphires are not usually shown to the public, not even in the most important auctions. For you to have an idea of the price and rarity, the last piece sold in an auction was at Christie’s, where one of these 22.66 carats treasures was sold for over 3 million dollars to an anonymous buyer.

Like the rest of the women in her generation, Ava loved the pearls. For her wedding with Frank Sinatra back in 1951 she chose wearing a pearl necklace together with earrings matching.

But the best piece in the collection was a ring with emerald and diamonds designed by Van Cleef&Arpels. The emeral, a piece of 4.6 carats with a perfect definition and a brilliant green color, was set into a circle of diamonds in 1961 in New York. Some other highlighted pieces in Ava’s collection were:

It’s clear so far that the Ava’s preferred jeweler was Cleef&Arpels. They were the designers of almost all her most important pieces.

However, in comparisson with other contemporary actress, Ava’s collection was quite small. Small but the most beautiful and one of the best of the time.

In 1989 she decided to sell part of her collection in New York. The rest of the jewels was auctioned not long after her death in London.

She’ll be always remembered like “the most beautiful animal in the world” and her jewelry collection like one of the most distinguished in the time.