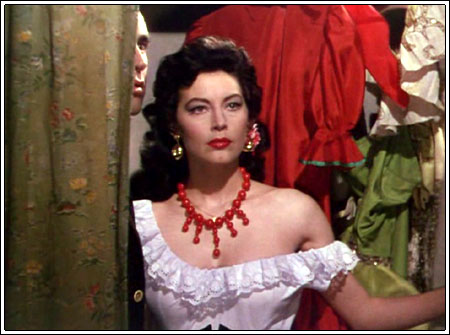 It won the Oscar to the Best Actor in a Supporting Role and was nominated to the Best Writing, Story and Screenplay.

The film got many other awards you may consult in the IMDB website. Ava Gardner has never been this beautiful, I’d say. She was a sex-symbol and she was the only one able to do a scene like that one, taking off her bath robe and showing her body in a swimsuit.

In a time where the nude was forbidden, Ava shows one more time why she was known as “the most beautiful animal in the World”.

Her huge sex appeal and her wild and magnetic personality (not only in the film but also in real life) make this movie the best Ava Gardner worked in. This is how Ava will be remembered by her fans.

Bogart and Edmund O´Brien, who do the voice of María Vargas’ conscience, only can fly around Ava. And despite they were better actors than she was in that momento this is with no doubt a film thought to be starred by the unique Ava Gardner.