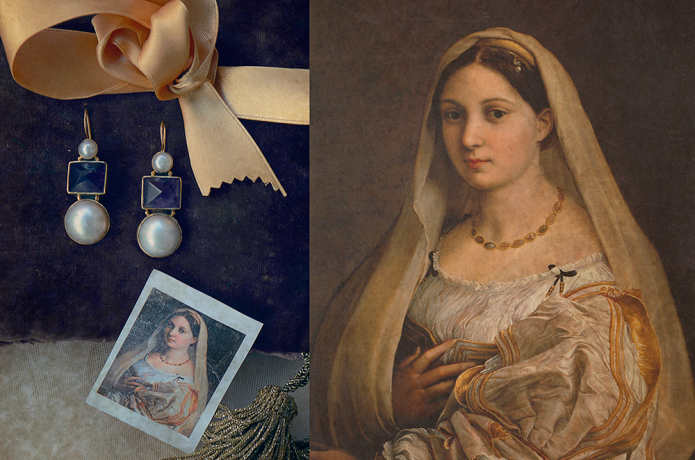 According to the legend, Raffaello Sanzio, known as Raphael, fell in love with Margherita Luti while she was washing her feet under the Tiber river. The love he felt was so appasionate that he couldn’t concéntrate while he finished an order from the reach banker Agostino Chigi. The client was so desperate that finally he moved Margherita into a house close to Raphael, in order to let him finish his work.

And then he painted Margherita… And in both paintings appear the Historic Jewels I want to talk you about today: In the impressive “La Veleta” and “La Fornarina”

“La Veleta” was made in 1516 and Margherita poses wearing rich clothes and a veil in silk (apparently) and over her hair she wears an appealing ornament with a pearl and a ruby. It’s almost stuck to her careless hair (a proof of her adulterous life). This piece is very similar to the one whe also wears in “La Fornarina”, under a turban this time (a common accesory by the time). I’d say both jewels are the same. And here I bring them both to you: One over a thin chiffon and the other one over a rich silk brocade.

In 1514 Raphael got engaged with Maria Bibbiena, Cardinal Medici Bibbiena’s niece. But this marriage never was consummated. His mind and heart were with his true love: Margherita Luti, “La Fornarina”. Margherita was Francesco Luti’s daughter, the owner of the bakery Fornaio de Siena. Her humble condition stopped the family from marrying Margherita to Raphael, a very recognized artist in the time. So she had to resign herlself with being his lover.

It’s possible the most reliable proof of this romance was the painting “La Fornarina”, where Margherita poses half naked only covered by a soft and thin silk, holding a breast with her right hand. According to the history, this painting was hidden in his studio and only a few knew about its existance. Like in the good love stories, this one between Raphael and La Fornarina had a sad engind. After a night together, he fell ill and died 15 days after. The artist left enough money to Margherita to finish her days without any trouble. However her plans were different. The pain was such that she joined the Convent Santa Apolonia in Santa Dorotea where she lived the rest on her life. She never touched the fortune Raphael had left her.

This is one of the most beautiful love stories in Rome during the Renaissance, linked to a jewel that already is in our Historic Jewels Collection.

2 comentarios acerca de “The jewels witness of the most touching love story in the Renaissance: Margherita Luti”

What a wonderfull jewels!!