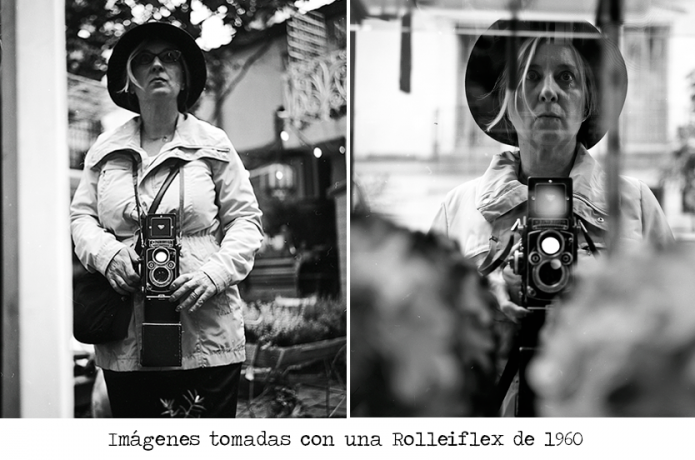 Vivian Maier (1926-2009) left an impressive photographic legacy. You might have enjoyed a tiny part of her job in an exhibition last Summer in Valladolid (Spain) or any other city where it was showed in the country. If you did, you are very lucky, because I couldn’t find any other show with her pictures.

I found her thanks to Beatriz Garcia Couriel during an online photography course. Her simple and plain work will take you to the streests of Chicago and New York during the second half of the 20th century. Those pictures really amazed me.

Vivian used to develop her rolls in the bathroom of the house where she was working as a babysitter. She gathered houndreds of them! Most of them have not been developed yet. Her legacy was discover by chance when over 100,000 negatives were found after an auction in Chicago back in 2007. The owner of that material John Maloof hasn’t been able to public everything yet.

She shot at daily life scenes in Chicago and New York: prostitutes, beggars, homelesses, children in the streets… All of them common daily scenes full of magnetism.

One of the series that grabbed my attention was her self-portraits. They are reflections over mirrors or windows. Shots that she made while walking on Sundays. You’ll find on them a serious Vivian; shy, reserved and discreet. At least, those are the feelings this series makes me feel! The manager of the commission of the exhibition in Valladolid, Anne Morin, explained the reason might be the permanent search for herself. Vivian was the foremother of this trend.

In the beginning I thought to focus on those self-portraits to do my copy of her work, under the most common “Vivian style”, made with a camera very similar to the one she used. A camera I found in an old wardrobe that belonged to my father. A complete Rollei with several lenses, filters and even a remote shooter. Finally I decided to get out with my camera and try to get the shots she would have made.

Here’s the link to the movie of Vivian’s life. It’s totally recommended since you’ll know why whe was the way she was.

This is my own work, the one I’ve done with my colleagues from El Objetivo Magico. I hope you like it!