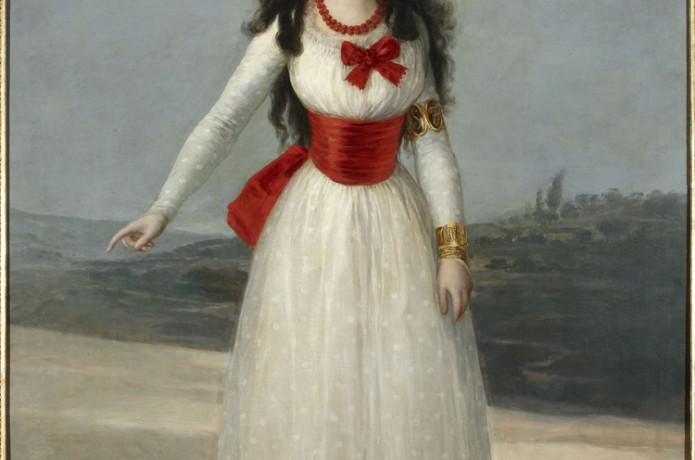 On Friday afternoon I went to visit the “El Legado Casa de Alba” (The Legacy of the House of Alba) Exhibition. We were lucky enough to enjoy a private visit with Maria of Cuenca. A real luxury to be able to have the experience of listening to her exclusively and an absolute delight to wander through the exhibition rooms with her.

The exhibition has reunited about 150 works from the Liria Palace. Many of them are being exhibited to the public for the first time in history in what we could call the most important cultural exhibition of the year.

By opening this exhibition the House of Alba Foundation has wanted to make known the extremely important work that it carries out in order to maintain and conserve one of our country’s most important private collections.

If I must choose only one piece from the exhibition it would be the “White Duchess” by Francisco de Goya. This painting fascinates me, I had been wanting and hoping for the chance to see it in real life.

It was months ago that I requested a visit to the Liria Palace and I am still awaiting a reply. Amongst my greatest desires is that of being able to enjoy this painting in its original location; to wake up in the morning, enter one of the living rooms of your house and admire this work by Goya, it must be something difficult to describe.

The painting is magnificent. Doña Maria del Pilar Teresa Cayetana de Silvia and Alvarez of Toledo, the XIII Duchess of Alba, was one of the most attractive women of the Enlightenment in Madrid. Her beauty has been sung about by poets and musicians; it was said of her that she was so beautiful that when she walked down the street the whole world looked out at her from their windows and even the children left their toys and games in order to admire her.

Doña Cayetana had a strong temperament and was well known throughout the Madrid suburbs for dressing as a ‘maja’ (xviii and xix century inhabitants from certain areas in Madrid who dressed in resplendent costumes) in order to participate in traditional festivals. She was a strong defender of actresses, poets, painters and bullfighters, she even managed to cause dispute over the favours of handsome young men with other courtesans, including the Queen herself. She was a real character of her time, an assertive and restless woman with whom Goya fell in love with from the very first moment he met her.

Goya knew how to capture her assertive, restless and daring personality that she possessed for the time she lived in. An elegant dress of white gauze was chosen with a red ribbon around the waist, a coral collar and various ribbons of the same colour over her chest and in her hair. The bows reminded me of those flowers that the Duchess of Alba used to wear for all her public outings, I think this was a gesture towards her ancestors. Her hair is loose and curly, something that would have been unthinkable for a high bourgeoisie Lady like her, something perhaps more appropriate for the courtesans of the period. To her right is her lapdog with a coquettish little red ribbon around his paw as a symbol of fidelity. Possibly the same fidelity that the painter professed.

Other works of art worthy of mentioning are “The Virgin of Granada”, a unique painting belonging exclusively to the hands of Fra Angelico, never before exhibited in public.  Or well known documents such as Christopher Columbus’ autograph letter collection, the most extensive one we know, just like the first edition of Don Quixote.

Other pieces that really caught my attention were those related to Maria Eugenia of Montijo. One was a marble bust of which I attach a photo in bronze (I haven’t found any of those belonging to the House of Alba). What particularly grabbed my attention about this work of art was the broach worn on the neckline, as seen as I have two very similar models in the shop. As a summary of the exhibition I leave you with the words of D. Carlos Fitz-James Stuart and Martínez of Irujo, Duke of Huéscar: “Our intention is to share the works and pieces that make up the Casa de Alba Foundation’s collection with an audience that is increasingly familiar with and interested in culture and history. This exhibition enables us to present various works and documents that have survived the ups and downs of history and that form the greatest treasure of our family’s legacy. “

The exhibition is an authentic journey through Spain’s history, guided by the hands of one of the most noble and title-holding families of the world, I don’t recommend you miss it.

It is open until the 31st of March

Video:  The Legacy of the House of Alba