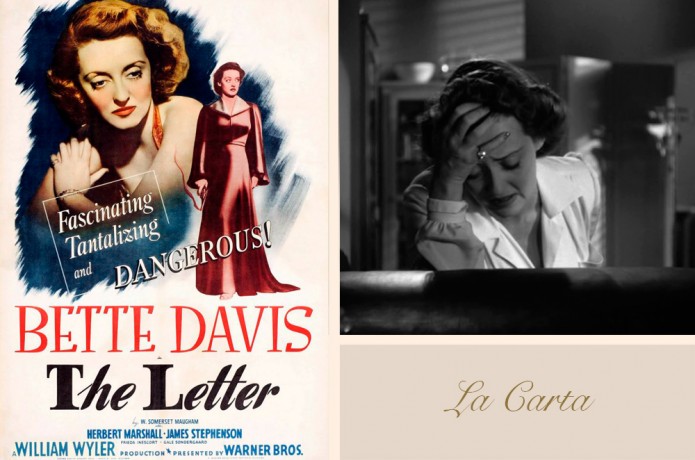 What a role Davis played in this drama! I hadn’t seen this film before, nor did I know that I was going to see it, despite the fact that she is one of my favorite actresses, and I had been dying to see her play this evil role of which I had heard so much about.

It took me quite a while to track down the film. Finally, I managed to find a copy on Ebay. As I am buying myself all our Wednesday’s special movies, it makes me extra happy to know that I have the 52 tapes at home to watch again anytime I please. I have already found a special corner for them on my living room shelf.

For many, this is Bette Davis’ best performance, with which she molded her wickedly evil aura. Although Jezabel interprets the role of a young ill-educated, bourgeois, capable of hurting others out of pure spite, she finally shows that she has a good heart and is willing to atone her guilt. On the other hand, in The Letter she is shown in a pure evil state. Manipulative, cynic, false…she has it all…

This drama has some intense scenes. To start with, the first minutes of the film make a huge impact. The camera wanders around the outside of the plantation where the sleeping indigenous are shown between the bushes on a dark and gloomy night. Suddenly, she appears… undaunted, with a cold and piercing furore, she unloads the revolver with an overpowering security. After a few seconds, surprisingly, she turns into a sweet and grieving wife explaining the details that lead her to carry out the assassination.

Another scene that had a great impact on me was the prison scene. What an incredible manipulation strategy! She manages to twist the the attorney round her little finger in the most subtle way, as even he barely seems to notice. After, is the scene in which she faces her lover’s widow with those gloomy looks of hers covered by a beautiful white lace veil. Finally, we see how the two lovestruck women come face to face in a fight as they look intensely at each other, as if challenging one another.

The director ingeniously recreates the main character’s personal charms, not only her unique beauty but also the magnetism of her gaze, and her expressiveness that continually dominates the entire screen.

The film, which reflects passion, love, sincerity and fidelity, although hugely successful with the public at the time, it did not receive any of the six Oscars that it was nominated for.

Personally, it had rather an impact on me…

Have you seen it? The first scene of the film: (it already starts off with a strong impact).