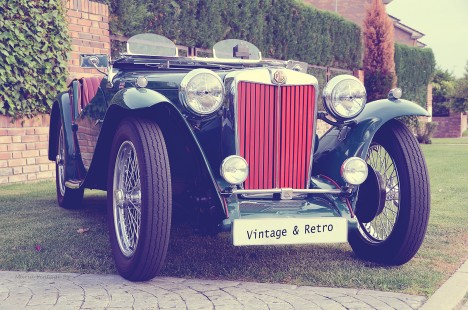 It is rare that one Sunday such an attractive plan as this should come up. A few weeks ago a good friend called to tell me that he had bought an MG.

I must admit to you all that I absolutely love classic cars, with their spoked wheels, their wooden steering wheels, those funny headlights that seem to be looking at you with bulging eyes… All this reminds me of a car that I adore and that brings incredible childhood memories back to me: “Chitty Chitty Bang Bang”, of which I hope to speak in a few weeks.

My friend’s car is an MG, a 1949 racing green MG TC. I don’t know much about cars, but from hearing the explanations about how and why he obtained this jewel of British Engineering, I couldn’t help but feel excited.

The whim of this man, recently retired from everyday work, arrived fromEnglandand he told me about how its previous owner had deposited it at the very door of his English style house in Las Rozas. The car was carefully transported on a platform towed by he himself from the green countryside ofLincolnshire.

The previous owner is an English collector who specialises in MGs. He sells them after fixing and fitting them with every luxurious detail, leaving them in perfect condition to be used for many more years in the hands of another collector or Classic English sports car lover like himself. He sells them just as he had found them yet with a known and identifiable history and, as they say, in running order. For completing this task, there are no better than the English, who are the best in the world for these things. They maintain their traditions in such a way that it is difficult to match. In the last three years my friend has dedicated hours to restoring the car in the garage of his house, until leaving it in nearly perfect condition.

My friend always wanted to own this car. It’s a whim that he has had in his head since he was a child of barely 9 years. At that age, one day whilst out walking with his father, he saw one parked inCentral Streetof Santiago de Chile. He fell instantly in love with it and whilst his father explained the technical qualities of this magnificent automobile to him, he couldn’t stop thinking that the car would be perfect to be driven by a boy of his young age. So accessible and compact, he would be able to manage all the vehicle’s controls with no problem. Childhood dreams that we have all had, right?

This event lead to the fact that many years later, now at the age of 20, in a good friend’s house he would find a TC again in the garage, this time in red. The car was in pieces and totally ruined, however, like the good engineer that he was, as soon as he saw it he could already imagine himself fixing and mounting every one of its valuable pieces one by one. He made an offer to his friend, invested all his savings and acquired the car that so reminded him of his father and that which he had so often dreamed of since he was a child. He dedicated many hours to retrieving every one of the pieces, polishing, cleaning and fitting every one in its place so that the TC could once again roll proudly and strongly along the highways ofChile.

Years later he would find himself obliged to sell it in order to accomplish another dream: come toSpainwith his wife and form a family here.

For the lovers of all things technical, I shall tell you that according to my friend, the brand MG, thanks to the MG TC, obtained a great reputation in theUSA, selling more than 2000 of the total 10,000 TC models that had been manufactured. Many American soldiers that had driven and even acquired a Midget’s model in Great Britain during the war took the pleasant memory home, resuming their romance with this suggestive sports car by soon acquiring one in their home country. One of the most famous owners of this car was the Duke of Windsor, Uncle of Queen Elizabeth ofEngland.

The appearance, sound and best of all the control of the MG TC are unique. The driving is hard and continuously rebounds. The engine has a lot of revolutions and is very noisy and the management has had too long a journey.

As the 1250 cc engine wasn’t powerful enough, the car had to go in a low gear and at high revolutions to give its best. Due to it having no aerodynamics the maximum speed was limited to 120km/hour.

For me, this car is a dignified jewel, one to enjoy with time, patience and peace. Imagine the tacking and narrow roads that wound through the green English countryside in the early Twentieth Century, to drive through them in these beautiful cars would have been an unforgettable experience.

I love to see how there are still people that get excited keeping and talking about these kinds of cars. Pieces that today are a collector’s item and an authentic example of good design, reliable mechanism and a driving style that still excites us after more than 100 years. Thanks to them we can relive periods of our history that in other circumstances would already be forgotten.

I’ll just be satisfied with a ride through the foothills of the mountains ofMadrid, which I’ll tell you, seemed to me equally thrilling and I hope to be able to repeat the experience again.

It’s a most Vintage car that stops traffic wherever it goes.

Beautiful story of a child´s dream turned true, and congratulations for understanding and transmitting the feelings involved. Keep it up, you have an excellent and hard to find web page with the much sought after patina of Vintage times.