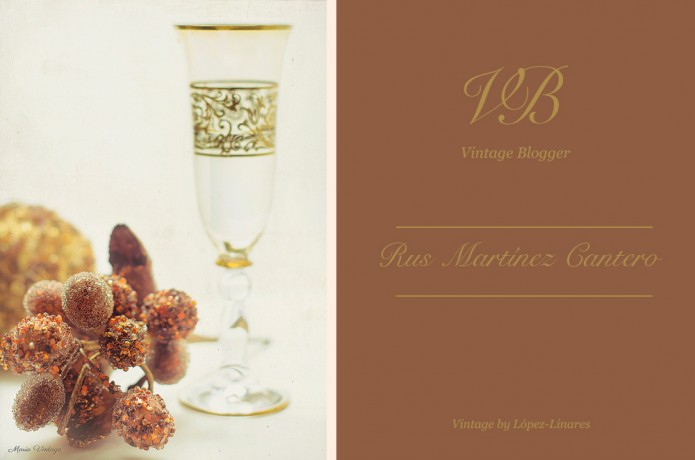 Through this beautiful term we refer to good quality and artistically designed antique objects. The word, and above all, the essence of the term ‘vintage’ makes each one of us think of different things: clothes, jewelry, decoration… And although nowadays we tend to associate it with fashion and design, I cannot forget its origin.

Vintage is an English word with a beautiful sound (translated into the Spanish language as ‘vendimia’). The term ‘vintage’ was used for wine in reference to those aged wines produced from the best harvests.

Due to this, I think that in my case, whenever I hear the word ‘vintage’, bubbles come to my mind… Champagne bubbles.

I close my eyes and imagine that magical night in 1670, in the wine cellar of Hautvillers Abbey.

Startled by the pop of the bottle, his Abbot Don Pierre Pérignon, descended down to the cellar, and after tasting the wine that he had spilled, he woke up the other monks with a shout that made history:

“Come, brothers, come! I am drinking stars!”. Of course, he was talking about champagne.

Consequently, when I think of the monk Pierre Pérignon trimming his vines so that they wouldn’t reach more than 90cm in height, gathering only the grapes that were whole, and only when it was cold. Or when he put the humid netting over the branches that were in the sun, in order to keep them fresh and not allow any kind of maceration to change the wort taste… This is when the concept of vintage reaches its most splendid height in my head.

The first harvest of Don Perignon Vintage was in 1921. Each new Vintage is created from the best grapes added together at the same time. If this addition doesn’t meet with the standard of excellency, it is ruled out of being a Vintage.

There is a story that happened in July 2010 which is really fascinating:

A group of divers found a sunken ship in the Baltic Sea, the vessel was probably wrecked between 1825 and 1830.

Where was the boat going? Who was the one to which the treasure was being transported aboard? These are questions that today we surely won’t be able to find the answer to.

However, what we do know is what was looted from this boat: 145 bottles of French champagne.

It is a boat that sunk nearly two centuries ago, and the most exciting thing about this story is that 79 of those bottles, from three well-known brands: Veuve-Clicquot, Juglar and Heidsiek, are in perfect condition to be consumed.

It seems that the constant temperature of the water, the darkness of the bottom of the sea and the pressure inside the bottle itself, managed to conserve all of the champagne’s taste qualities.

We will never know now who these bottles were for, nor the motive for the possible party or event for which they were destined.

What we do know is that, today, we speak of the oldest champagne in the world.

I raise my glass with all of you, and accompanied by these magnificent vintage bubbles, I make a toast to the fact that we can continue enjoying so many beautiful things and stories that surround us. Author: Rus Martinez Cantero, Social Media Strategist specialised on Digital Branding. She is this month our Guest Blogger at Vintage Lopez-Linares! Thank you so much!