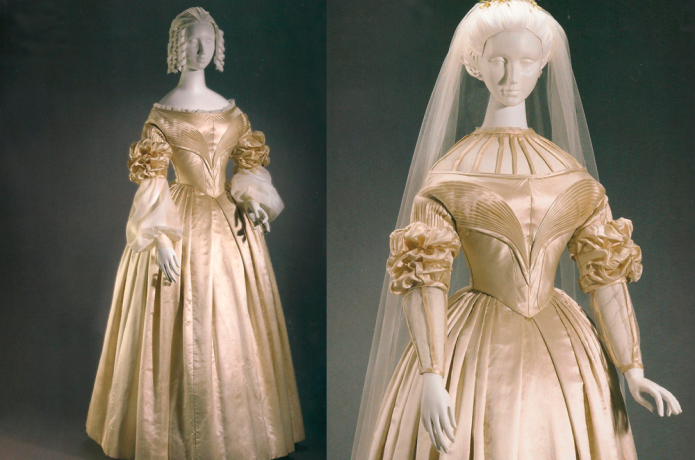 Why a daughter would want to wear her mother’s wedding dress? I’ve been thinking so much about this lately that I’ve decided to start a few posts around this theme: old bridal gowns and the stories and protagonists behind.

And the first story I want to share with you today is all but boring. I’ve been looking into the full story and I’ve been amazed with so many odd anecdotes. You know how I love digging into old stories from the past…

This time it wasn’t the lack of money what took Mary Mulenberg Hopkings into wearing the same gown her mother Mary Barr Denny Muhlenberg had worn 28 years ealier. Back in the time Mary (daughter) got married with one of the inheritors in the area. It was clear to me though her motives were sentimental. The fashion trends had totally changed since then but the daughter only touched the neckline a bit in order to make it more modest and also changed a little the design of the sleeves, but nothing else. I assume they should have had about the same size.

Mary the mother had been a woman surprisingly well prepared for the time. She stood up over the rest of the students in the prestigious Parcker Institute, in Brooklyn, where she joined advanced Maths and Astronomy, among other subjects. This knowledge along with her personality allowed her to continue working on the projects her husband left unattended when he died. She inherited a huge fortune which didn’t stop her from becoming into an incredible philantropic for the rest of her life. Hospitals, medical institutions, orphanages, schools and universities were a few of the projects Mary started besides her shy and discreet nature.

Mary made real the most ambitious project ever built by a woman in the time, the creation of the Mariemont Village in Hamilton, Ohio. It was a very advanced city with all the amenities you could imagine.

But Mariemont’s story goes back to the beginning of the 20th century, when her husband bought a ranch near Newport, Rhode Island. He called it Mariemont. There the couple spent wonderful times and started dreaming of how the project would be.

After Thomas’ passing, Mary spent over 7 million dollars to adquire all lands around her ranch. She needed a lot of space to build her dream city: a model place ready to embrace people from all levels, either buying or renting family houses. Mary placed the first stone of Mariemont Village on April 23rd 1923, but she died four years later leaving her heirs enjoying her magnanimous creation: one of the biggest construction in the beginning of the 20th century that employed the most prominent professionals.

I’m sure her mother would have been very proud of the role Mary played in the development of the US. She, a woman with the sensitivity of wearing the same wedding gown as her mother did had the courage of build one of the most ambitious constructions of the time. Here’s a mosaic with the two bridal dresses, the original one and then with the changes Mary did. Which one you like it more? I’d rather prefer the first option… The new neckline and sleeves don’t convinced me. How about you?

I’m with you! ….. I prefer the Mothers dress, it’s stylish & elegant! ……… the neckline & sleeves on the daughters dress looks out of harmony with the rest of the design, detracts from the beautiful material, almost cheapens it in my eyes!

I totally agree with you Shirley. Thank you very much for commenting both here and in Facebook and being always so kind to us. Hope we can help you in the future! Anything you need and we can get, we’ll be here for you. Best, Maria.