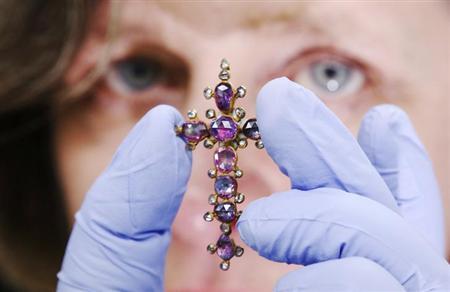 What a show in London until April 27th! It’s one of those exhibitions I’d love to visit.

Sadly I’ll have to see the videos I’ve found on the Internet instead.

I’d like to tell you the amazing story around this place, just in case you have the chance to pay a visit.

Back in 1912 a worker found by chance a box full of jewellery down in a house basement. Let’s say he found a treasure! Almost like a dream… A total of over 400 pieces… Is it not incredible? I can’t imagine his face when he opened that little case and found with a collection from the Isabelline and Jacobin era.

There were all kind of gems: Colombian emeralds, topaz and amazonites from Brazil, spinels from Sri Lanka, Indian rubies, lapis lazulies from Afghanistan… Also he found Persian turquoises, peridots found in the Red Sea, opals, garnets, Bohemian and Turquish amethysts and finally, pearls from Bahrein. Oh my God! An impressive collection of precious jewels!

Four out of them highlighted over the rest:

It seems the first Viscount Stafford originally owned the collection. Stafford was buried there some date between November 1640 and the Great Fire of London in September 1666. The box was sent to some jewellery shop that kept it hidden in a basement during the Civil War.

This marvellous collection can be visited at the London Museum until April 27th. If any of you can go for a visit, please, give me a call later or email me to tell me how it was. For now, I only can share with you all the information I’ve found on YouTube. Don’t miss it!