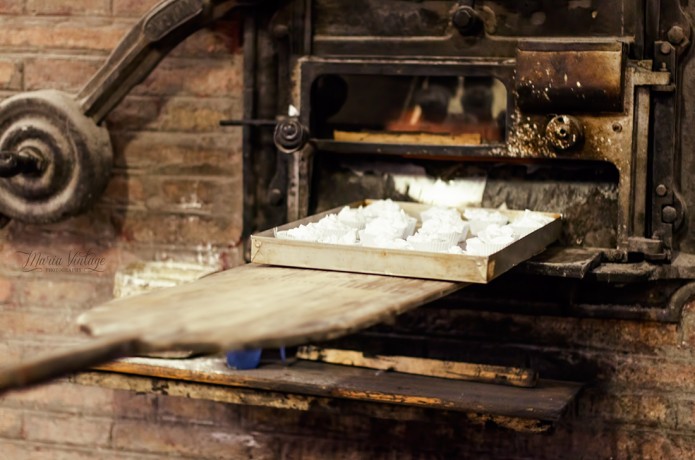 The “Forn de la Vila” (Vila Bakery) of Forcall.  A bread oven dating back to the Eighteenth Century.

The second surprise that my morning stroll around Forcall brought to me was the discovery of the oldest functioning bread oven in Europe.

In a narrow alleyway, very close to the square, I saw a facade on which shone an informative plaque, it was the first thing that I photographed: “Forn de la Vila” (Vila Bakery). This bakery has been baking its artisanal bread and pastries since 1246… something that struck me as rather admirable and surprising. After a few seconds I found myself chatting to Margarita, who, with a large smile on her face told me how healthcare had recently come and made it compulsory for them to separate the oven from the bread delivery area. Both had been sharing one space for centuries, thus a decision was made in that moment to place a large glass window that would allow the visitor to continue enjoying the view of the old ovens, the bread making surfaces, and the trays filled with pastries and bread ready to be baked. On the other side of the glass was the small sales area laden with traditional and exquisite pastries typical to the area of which I had never even heard.

The “Almendrados” (derived from Almonds) are small pinkish colored pastries made from meringue, sugar and almonds. Only a few minutes later I had taken photographs of Margarita putting one of her full trays of these sweets in the old oven. She recommended that I return later to try them once they had cooled, however, between one thing and another when I finally wanted to return to Margarita, she had already closed and I was left still wanting to try them.

As soon as you entered, Margarita displayed her various sweet pastries in a large display case. These included: the “Coquetas” (meaning the “Coquettish”), she makes them out of pumpkin preserve; the “Rolletes” (the “Rolls”) were small doughnuts with a little bit of spirit that gave them a special taste; the “Carquiñolis” (Almond biscuits) were small portions of very well toasted almond bread. Margarita told me that this was a pastry that could keep very well for a rather long time. Behind these were her variety of traditional breads: white bread made from wheat flour, hearth-baked bread and the typical bread rolls of the area that are made with 1 kg of oil and dough. I left there wildly energized by so many sweets and happy for having discovered this small baking paradise of the Maestrazgo region, which had been making artisanal products since 1246… At least eight centuries.

Margarita was very friendly, not only did she allow me to take some photos of inside the oven, but she also happily posed for me with an enormous smile.

The photographs are not of the best quality, as the oven did not have much light and I did not want to use flash. I did the best I could within my knowledge and resources available at the time.

If you ever pass by the Maestrazgo region do not hesitate to pop in to Forcall and visit Margarita and her bread and pastry shop. It’s worth it. It is like a little bread museum with a treasure of a bread-making oven, unaltered since the Eighteenth Century. This place was one of the biggest surprises of this trip.