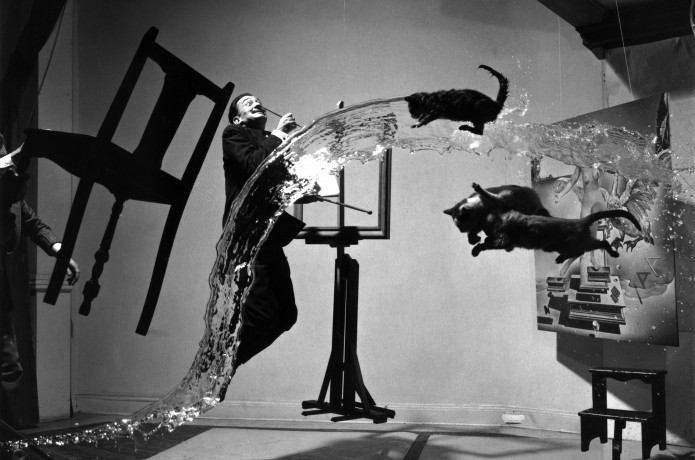 Today in our “Black and White Friday” I wanted to reminisce about the great master Dalí and the exhibition I was able to enjoy this summer in Madrid.

This small photograph, in respect of its art and not format, was one of the pieces that most grabbed my attention. It depicts a hanging moment, with an analog camera, and in which nothing is left to chance…

Considered to be one of the Twentieth Century’s photographic icons, this image is inspired by the “Leda Atómica” (Atomic Leda) by Dalí, a masterpiece that appears in the right hand side of the photograph. The photograph is a creation by Philippe Halsman and Salvador Dalí himself.

To capture something like this in one single shot, without the help of Photoshop or retouching programs, would have been far from simple. He needed the help of eight people and immense synchronization.

Whilst three people threw the cats into the air, another threw the water, at the same time the artist jumped and a fifth person quickly pulled away the flooring beneath the furniture so that the pieces would be suspended in the air for a moment. And not only all this… at that moment Halsam’s wife, Yvonne, held the chair up in the air, which we can see to the left.

I read that there were 30 intents and more than five hours of work, of which, sincerely, does not seem too much for the amount of coordination that this image involves.

This image was a revolutionary work in its time; it appeared on the cover of Life magazine on a double page spread and was a resounding success. It has been reproduced and imitated an infinite number of times.

I was lucky enough not only to see part of this series of the Dalí exhibition in Madrid, but also to enjoy the expert explanations from two professional photographers that attended the show with me, Beatriz García Couriel and Martín Tirado, to whom I wish to thank here for their enthusiastic and professional explanations.