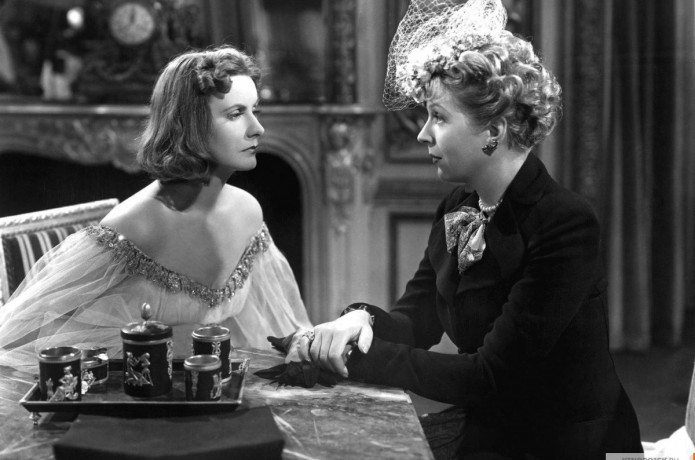 Ninotchka is perhaps Greta Garbo’s greatest film. She spent her whole life playing dramatic roles. Even in this film we are made to wait a good while to see her laughing and smiling, as a fair amount of time seems to pass until we see her roar with laughter in the scene where Melvyn Douglas falls of the chair. I can just imagine what happened on the day of the film’s premiere, the scene must have caused resounding laughter in all the cinemas at the time.

In this scene Garbo showed that she was not only prepared to act out all the dramatic scenes, but she also showed, as only an actress of her rank could, that she was more than capable of making her audience roar with laughter.

Under the sharp criticism of the Communist system in the grasp of the Bolshevik Revolution, only Ernst Lubitsch and Billy Wilder (both exiled from the Nazi barbarism and enormously warlike with totalitarian doctrines), were able to make a movie that loaded with cynicism, cunning and elegance, in a period in which the Soviet Union was governed by Stalin.

Greta Garbo, one of the great stars, in this interpretation of “Comrade Ninotchka”, shows us that she is capable of passing from a icey and inexpressive affiliate of the Communist party, to the most tender, mischievous and fun woman of a most exciting and genuine Paris.

She is a unique actress who we can enjoy in pure state in this intense and critical work. Ninotchka: We don’t have men like you in my country.

Ninotchka: That is why I believe in the future of my country. Ninotchka: Raw beets and carrots.
Cafe Owner: Madame, this is a restaurant, not a meadow.