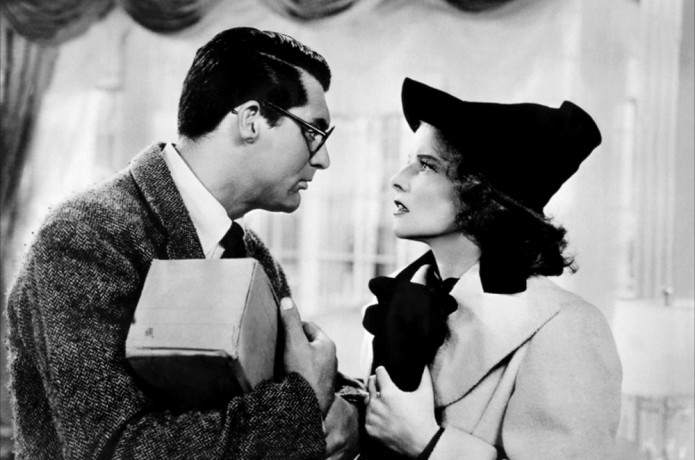 With all its trip-ups, stuttered words, costumes, nonsensical dialogues and unbelievable situations, the first few minutes of the film already indicate that we have before us one of the most enjoyable comedies in the history of cinema.

First we have the splendid Katharine Hepburn playing the role of a capricious, reckless and perhaps somewhat hyperactive rich heiress. Then we have the absent-minded, elegant and attractive Cary Grant.

It is a film charged with vitality and optimism, one of those which raises your spirits on a sad Sunday afternoon, and that makes your roar with laughter more than once whilst truly enjoying yourself.

These are three of my most memorable scenes:

The broken dress scene: a crazed Katharine that does not allow an absent-minded, muddle-headed and innocent Cary Grant speak, as he gullibly falls into Hepburn’s grip whilst she handles his every whim.

The scene of the robe, when Katharine’s aunt unexpectedly presents herself at the house to discover Cary Grant covered in feathers and gossamer.

Also, the prison scene, which nearly reminds you of a scene from one of the Marx Brother’s famous movies.

It is a comedy in which everything complicates itself to unexpected levels of romance and pure disorder, so absurd and silly that it makes you laugh. All this, together with splendid photography, an incredible atmosphere and, above all, a masterful interpretation by the two starring parts, make an unforgettable film that still provokes us to roar with laughter today. I leave you with a few of the funniest scenes: