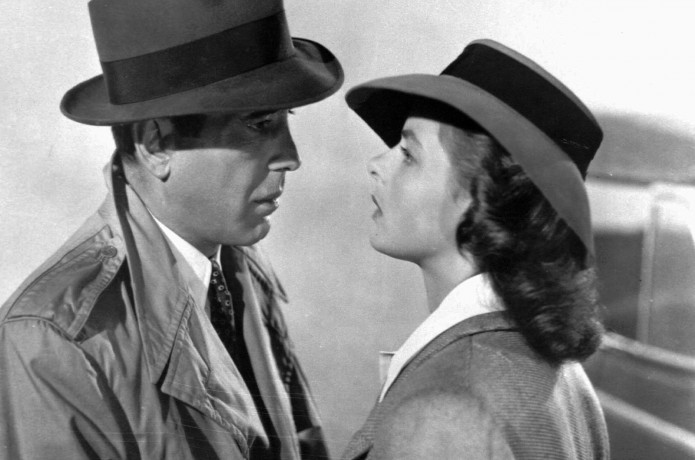 Casablanca is considered by many to be one of the best films of all times, despite its slightly bland script, a plot hard to believe, the highly sentimental almost corny love story, and some very corrupted characters (the French captain who gambles despite it being illegal, the club owner who allows gambling and controls who wins, and the club’s atmosphere where everything is bought and sold to the highest bidder.

Casablanca is, without a doubt, a film with a twisting plot. The speed with which these twists occur have perhaps succeeded in making this film the classic that it is. When it seems as though nothing else is going to happen, something unexpected occurs. Not in vain, the script used to change every day, it took an excessively long time and amount of money, which resulted in a never-ending film. The actors arrived and even they did not know what they were going to do on the day. Without a doubt, the cynical Humphrey Bogart becomes the absolute star of this film. Only he could have played Rick, and only he could have managed the situation, solved the problem and left the case blamelessly. Only Humphrey Bogart could leave a girl after her having previously left him tossed aside like a cigarette end, and still he comes across as an authentic gentleman.

It was very difficult for me to choose only one most memorable scene from the film. However, I finally decided upon the most exciting sequence, at least for me: It is impossible not to become emotional when Gestapo sings the Nazi hymn in front of a group of officials in “Rick’s Cafe”, Laszlo and the rest of the French clients stand up and begin to sing “The Marseillaise” until they manage to reduce the German’s voices to a mere whisper. I never thought that hearing the French anthem would make me so emotional, but I can tell you that it gave me nots in my stomach along with the odd tear.

The movie contains a script that has the perfect mix of suspense, love and humour. The director, Michael Curtiz, doesn’t lose the rhythm for a single second in a story where the chemistry between the two protagonists does away with everything. In more than 100 years of cinema, one can say that no one has looked at someone with the same passion as Ingrid Bergman shows each time her eyes cross with the strong yet vulnerable Humphrey Bogart.

Bergman enters “Rick’s Cafe”, dressed in white with a beautiful rhinestone brooch with matching  gleaming earrings that make her shine even more, if possible. She is like a shining star here, glamorous, elegant and simply perfect. Claude Rains’ part as the ambiguous and cynical inspector of the policeman Louis Renault is also unforgettable.

A perfect film to share on a quiet Sunday afternoon, if in company – even better…