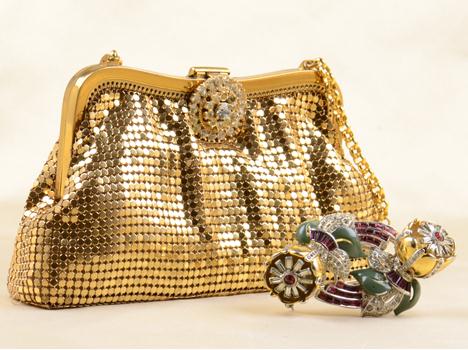 Coro & Corocraft was born from the hands of Emanuel Cohn and Carl Rosenberger, establishing itself in Broadway,New Yorkas a boutique in 1901 by the name of Coro & Rosenberger.

Soon after, and thanks to the success obtained from their exclusive jewellery line, they became so famous that they decided to open their own factory. It was here that they started their brand’s expansion and, in its time of greatest splendour, its employees reached 3500.

With Adolf Katz’ arrival as design manager in 1924,Coro’s Golden period began. His demanding style and exceptional talent were decisive at the hour of launching the brand at an international level. During the more than forty years that he occupied the post of the company’s manager, Katz was an icon of design and innovation. The top-quality line, Vendôme, created by him in 1944 was his most exclusive brand and was distributed in luxury shops in all the big capitals of the world. Its success was so resounding that it became a subsidiary brand in 1953, and its pieces were sported by the majority ofHollywood’s greatest stars of the time. During this period Vendôme’s pieces were highly demanded by collectors.

Adolf Katz was a genius regarding his design and innovation. Delicate broaches and flowers with movement were created by his hands, a great innovation for the time, such as his famous enamels and his legendary “duets”, pairs of broaches that you could wear together or dismount them to wear separately. Due to these types of broaches and because of the type of fastener used,Corohad a lawsuit with Trifari. Katz had registered the patent of his fastener in 1931; however the similarity to the ‘clipsmate’ by Trifari meant that this company would begin a legal campaign againstCoro, trying to establish an artwork copyright for the jewellery design. Trifari won the case in 1954.

Between 1930 and 1950 the “Jelly Bellies” caused a huge impact. The impact was due to some little animal broaches with tummies made a colourful stone, a crystal in the shape of a cabochon, or a new plastic material called ‘Lucite’ (discovered by Dupont in 1937 and that gave way to a great revolution in the world of jewellery, as it easily substituted stones such as chalcedony and moonstone).

Another designer that contributed greatly toCoro’s fame was Gene Verecchio who started to work in 1930 and remained in the company for thirty three years. It is also worth noting his highly personal “duets” of camellias and owls. The pieces from the Thirties and Forties are the most valued by collectors.

Following the death of the two founders, Rosenberger’s son, Gerald, inherited the company, he died in 1967. His descendants sold 51% of the company to Richton International Corp. In 1979 the company fell into bankruptcy and only maintained the production inCanadauntil 1992, the year in which the last factory was definitively closed.

For all these years the name of Coro & Craft signified a milestone of quality and design, reflecting the latest fashion trends during nearly six decades.

Don’t you think it would be exciting to wear a piece designed byCoro?

They seem incredible to me, combined with a resounding black suit or with a night blue dress for a special occasion.

We are waiting for you!