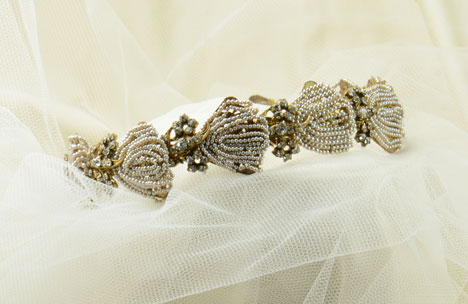 When we choose a piece of jewellery for our shop, it is because it transmits something special and magical to one of the three of us. It seems incredible, yet we usually coincide in our choices. It is curious that being so different we always coincide at the hour of choosing the pieces that are to enter in our space.

Although there are some pieces that we fall in love with more than others, each one has its fetish piece that will never be sold and that captivates us at first sight.

Today I want to talk to you about one of my favourite pieces. It is a bride’s tiara by Miriam Haskell. It inspired me as soon as I saw it; it appeared to be of such a sublime delicacy and exquisiteness. When I held it for the first time, the first thing I thought was, why would somebody want to rid themselves of such a proud and delicate piece? It was surely a special commission for some youth in the Thirties. I am sure that she would have fallen in love with the jewel at first sight, just as I did.

For those of you that do not know Miriam Haskell, I will tell you that this design and business visionary was born in 1899 under the wing of a family of Jewish immigrants fromRussia. Her family managed to reach a rather well-off position for the time. Miriam studied at theChicagoUniversityfor 3 years before moving toNew Yorkwith 500 dollars in her pocket, most probably lent to her by her family.

Soon after arriving she managed to establish herself at the Mc Alplin Hotel, which in these times was the biggest hotel in the world, holding a capacity for 2500 people. The hotel was situated right in the heart ofNew   York City. There she opened a small shop where she sold jewellery from the famous designers of the period. A broach in the shape of a needle by Miriam Haskell

Miriam immediately decided to launch her own firm and contracted the services of Frank Hess, a young window dresser with an unusual aesthetic sense and taste for the time. Frank would rapidly become the brand’s Creative Director. He had a rather complex personality and his shyness made him feel more comfortable working in the workshop between sketches and stones, than attending the uncountable clients that visited his shop desiring to be attended by him personally. He was a very peculiar character, known for his tall top hats and his silver handled cane. He was very demanding with his employees.

On the other hand, Miriam was a vey attractive, elegant and intelligent woman and when she was in the role of the brand’s public relations, she was in her element. In this way they complemented each other perfectly.

They managed to become a great success in a very short time. In 1930 they were already rubbing shoulders with the most select and influential people in the artistic and social circles, so much in Europe as in Hollywood and New York. Women of the scale and influence of Joan Crawford, Lucille Ball or the Duchess of Windsor wore Miriam Haskell’s designs at these great parties. Miriam Haskell earrings from the Thirties

In the Fifties Miriam fell into a deep depression, her state meant that the company fell into her brother’s hands. She never went back to work and retired soon after the end of the war, it is said that she was influenced by the horrors of the war itself and didn’t manage to overcome the disasters that she had lived. Frank continued to work in the company until he retired in 1960.

Currently, it is rather difficult to find pieces from the brand’s first period and the prices tend to be rather high.

Although the company continues making marvellous pieces of jewellery, many of them inspired by Miriam and Franks great collections, for me, they do not match up to the delicacy and sensitivity of the pieces made by them in those golden years. They made a magnificent “tandem” and knew how to transmit their enthusiasm and illusion to all the women of the time.

I will leave you a link to the brand’s current page so that you can judge for yourselves: www.miriamhaskell.com

The following photographs that I have attached for you are hand coloured prints by the artist Larry Austin. They are illustrations made between 1930 and 1940 and were used to promote the brand in shops and jewellers from all over the world. In them we are able to appreciate the beauty of some of the most sophisticated pieces.

Had you ever heard anyone speak of Miriam Haskell before? Hello you have a fantastic blog over here! Thanks for posting this interesting stuff for us! If you keep up this good work I’ll visit your weblog again. Thanks!