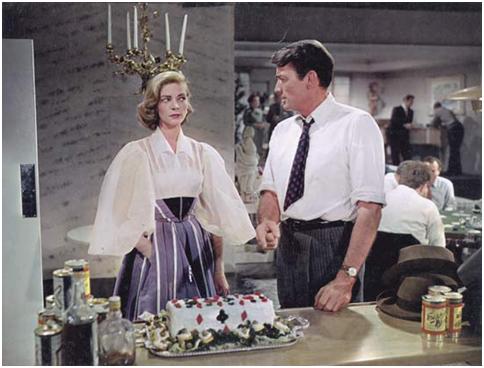 George Wells won 1 Oscar to Best Writing. He also was nominated to the WGA Award for the Best Written American Comedy.

3rd Place Laurel Awards for Lauren Bacall as the Top Female Comedy Performance. The movie was also nominated to the Golden Laurel as the Top Comedy. A smart and elegant custom designer gets married with a gullibel sport journalist who has to fight against both his past and a gang of Mafia members who want to beat him.

While Lauren Bacall, in a role that seams to be perfect for her, is surrounded by a good taste and extravagant people, Gregory Peck gets into that glamorous environment with rude fellows.

The social collision is there again, this time it’s served with a very smart touch of comedy. Situations are perfectly directed by Minelli who made a film that even nowadays has the same strength that it had back in the time.

The supporting actors do a great performance too, specially Maxi (a silly boxer) and Lori Shannon’s roles. The last one manages truly well the silliness that her former couple made.

If you are a great lover of those 50’s you just can’t miss this constant display of dream dresses. The movie, with more that 100 suits designed by Helen Rose, became one of the smartest and most glamorous MGM’s films.