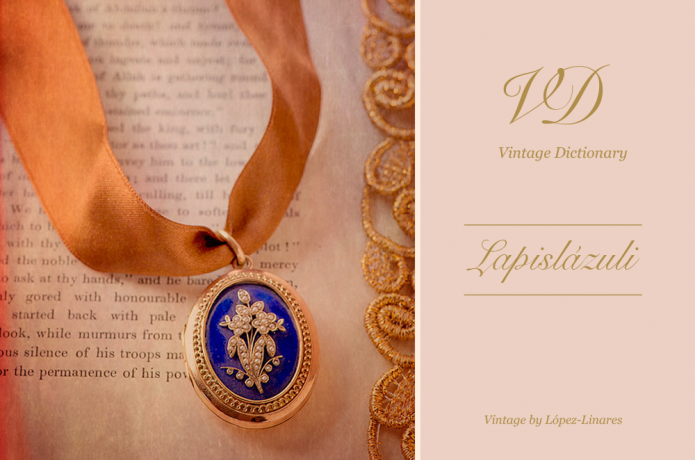 Sacred stone for antique Egyptians and commonly used in their temples, decorations and funeral ornaments. They actually thought it was a celestial material. It intense twilight blue and the white spots on it make it look like a starry sky.

After the Middle Age, the dust from the lapis lazuli – commonly named Azurite – became into a pigment very appreciated by artists and the fabric workshops.

However, it was during the Renaissance when this stone reached the condition of “blue gold” – four times as much as the price of gold – when masters started using it as a proper pigment in their paintings. Leonardo da Vinci or Alberto Durero were some of the distinguished artists who inmortalized its delicate colour. Then, the use of it spread out across the workshops of the epoque. There it was used to dye fabrics thanks to the quality and beauty. Among the most well-known cabinetmakings also started using it with decorative purposes.

The name came from the latin “lapis” (stone} and the arab word “azul”, with the same meaning. It was considered as a symbol of purity, health, good luck and nobility.

Let me give you a piece of advice for you not to be mislead when buying an original (or plastic) lapis lazuli: The authentic lapis lazuli doesn’t burn easily, so if you put a lighter on close to the edge of the stone won’t get any damage.