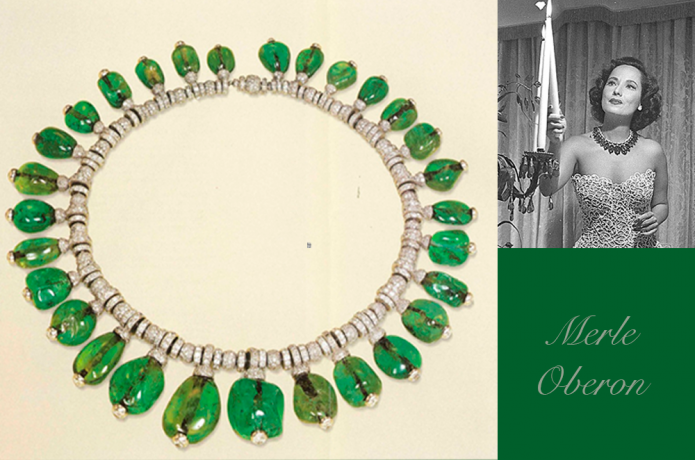 Merle Oberon was the alias of Estelle Merle O’Brien Thompson, a British actress who was born in Tasmania by the beginning of the 20th century. She is the first protagonist of our new section “Collectors of Jewelry of the History”

Merle Oberon was living in India until she was 17, when she moved out to London on the purpose of becoming a successful actress in cinema.

Her better good luck came when the productor and director Alexander Korda found out about her by chance back in 1930. He made her shine as one of the big ladies in British theatres during the 40’s. The ended up getting married and he was one of the first ones who started giving her away really expensive jewelry. One of the very first pieces she acquired was an old necklace in diamonds and emeralds that apparently was a gift from Napoleon the Third to the Baroness Haussmann. It’s said that was his way to thank her for the role of her husband in the new and more modern Paris. Thanks to the alterations made in Paris, this city became in just two decades into the most modern capital in the world. Merle worn the piece in movies like The Divorce of Lady X and Of Love And Desire. Later Merle Oberon removed two tears to the necklace in order to make them earrings.

In 1939 after her marriage, Alexandre got her one of the pieces most beautiful in her collection (at least, it is to me): a Cartier’s piece made with three flowered-formed brooches. The one in the middle, the biggest one, has a charming detail on it: the pistils are diamonds with some movement which adds beauty to the whole piece. These brooches were originary designed to be worn as hair clips but Merle preferred to let them be brooches or even cameos. Sadly after she died the three pieces were sold separately.

There’s a curiosity here that you’ll love to know: a few years later, the Princess Elizabeth of England would get a especial wedding gift from the Prince Philip of Greece: a tiara with three identical flower-formed clips designed by Cartier. Elizabeth II removed them to wear them separately and she did so in many occasions. Merle Oberon wearing the Cartier’s three-flowered clip that was supposed to be a hair clip in the origins. Photocourtesy of Fine Art America

However, the most amazing piece within her collection is a necklace of diamonds and 29 emeralds from the Baroque that Korda gave her in 1939. The piece fitted her very nicely due to her exotic beauty. The necklace has a very original design for the time especially because of the sensual and elegant form the emeralds are linked.

The story of this piece is very curious indeed and show how humans always want badly what others have. It seemed the necklace meant to be acquired by the designer Elsa Schiaparelli. However Merle saw it in a store in Paris and when she asked the seller about it, she was said the piece had another admirer. Merle didn’t believe the man and thought it was a strategy to sell it to her. After a few days she realized the seller was right when she passed by the store and the jewel had gone. Her mysterious rival was in a fitting room trying on the piece.

The day after Merle went back to the shop to see if the necklace was still there and she saw how Elsa Schiaparelli leaving the place. She came back so devastated that her husband went out, straight away to the jeweller’s and after asking for the piece he surprisingly got it. The stunning 29 emerald will shine in her exotic neckline from that moment onwards. Merle enjoyed that necklace until she died.

Cartier 1938, 29 stunning Baroque emeralds like tears, linked with platinum and diamonds, 44 cm long and finished in 2,642,500 CHF. This is one of the Cartier’s necklace most photographed ever.

Link to the necklace in the Catalog Antiquorum

Other pieces in her collection:

Most of these pieces were sold in an auction in New York back in 1980, exactly a year after she passed away.

Merle Oberon had a really beautiful and huge jewelry collection.