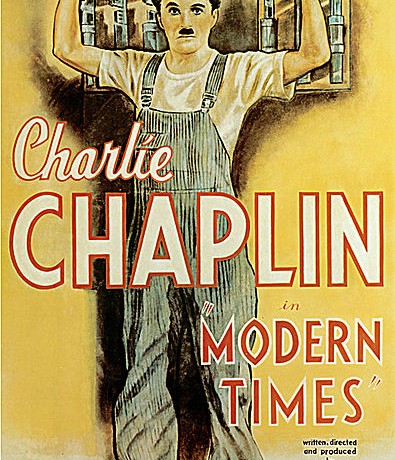 Director, scriptwriter, producer, editor and composer of the film’s soundtrack: all Charles Chaplin himself.

It was Chaplin’s last silent film with sound and voice effects… even though the rest of the world was already making talkies.

It was a desperate criticism of many people’s work and employment conditions during the Great Depression. The film narrates the life of an oppressed assembly line factory worker. In one of the funniest scenes of the film the worker is used as a guinea pig to try an automatic moving machine. The machine’s problems nearly drive the worker crazy who, in a nervous frenzy, paces madly around the factory oiling everything. After being driven to a psychiatric hospital he is soon discharged after a few months, however, he is then arrested upon being mistaken to be a radical leader.

Life in the prison is comfortable, by which he reluctantly accepts the parole after narrowly missing a riot. Outside he discovers huge unemployment and, despite his brilliant recommendation letter, he does not manage to find work. Impatient to go back to prison he gallantly accepts to take responsibility for robbing a loaf of bread on behalf of a young and beautiful orphan; a homeless girl living on the streets of the city. The robbery results in both characters being arrested, although they manage to escape the police. From this moment on, both protagonists start a life together, trying to make it as stable as possible. We can live their adventures, their dreams, all this with a touch of humour motivated by Charlot’s terrible luck in each of his jobs.

There are some scenes with such an impressive load of humour, that if you haven’t seen them I am sure they will make you roar with laughter. For example, the scene in which Charlot works as a waiter and desperately tries to carry a tray over to his clients whilst dancing non-stop, or his success with an improvised song when he manages to get a job as a lead singer in a café. For me these are some of the movie’s funniest moments.

Charlot’s character is unquestionably full of tenderness, managing to make you laugh and nearly cry in the very same scene.

The film was a box office success. Here are some of the anecdotes that surround the film:

It was the film that convinced the House Committee on Un-American Activities that Chaplin was a communist, something that he simply denied.

The American Film Institute put the film at number 78 of the best films of all time.

One of the things that inspired Chaplin to make the film was a conversation with Ghandi about the industrialization that was substituting the work of the labour force.

The movie was filmed at 18 frames per second and it was projected at 24, giving it a more frenzied result.

Chaplin’s voice is heard for the first time when he sings the meaningless song of which I spoke in the synopsis.

Charles Chaplin and Paulette Goddard were an actual couple at the time the film was made, staying together for 4 more years and also filming “The Great Dictator” as a couple.

It is surprising that Chaplin dared to film a scene in which they talked so clearly about the cocaine trafficking in the prisons. Jussi Award for best foreign film (1974). The Jussi awards recognize the professional excellence in the Finnish film industry, including amongst this, directors, actors and scriptwriters.

The award for one of the ten best films of the year by the National Board of Review (1936). The National Board of Review, also known as the NBR, was founded in 1909 in New York as a protest directed at the city mayor, George B. McClellan Jr., for his revocation of film screening licenses in December 1908. The mayor thought that the new spectacle degraded the committee’s morale. The main purpose of the committee was to support the films of merit and advocate the new art in town, which was transforming the cultural life of the United States. In this way, and to avoid the governmental censorship of the films, the NBR became the unofficial guarantor institution before the government and the different representatives of the cinematographic world for the new films that were appearing. It still exists today.

The film was also nominated in 2004 in the “Satellite Awards” for best classical cinema launch on DVD.

I leave you a youtube link in which you can see the complete film for yourselves, and another curious tribute made in 2011 in the United States.