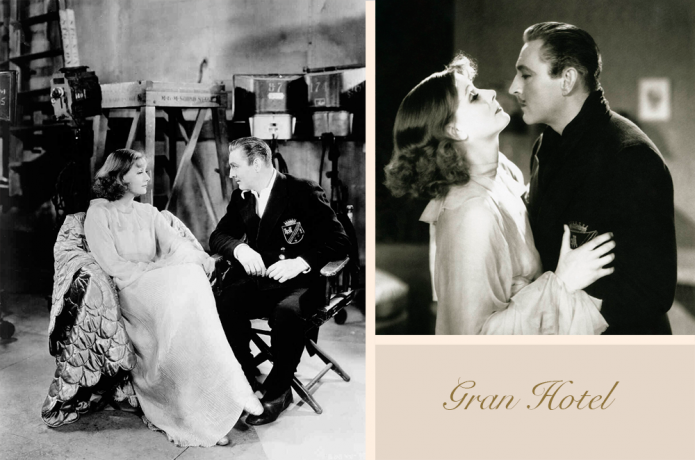 This film depicts life inBerlin’s most expensive hotel, and the coming and going of its guests and employees. It’s an adaptation of the novel “Menschen im Hotel” written by the playwright Vicky Baumm. The writer based the story on real events that occurred in a hotel where she worked between a shorthand writer and an industrial magnate. She used her own experiences as a chambermaid in two renowned hotels inBerlinto write her novel.

“The people come and go. Nothing ever happens” this is one of the quotes from the film that best describes it. A baron, an old war wounded doctor, a humble worker on the point of death, an aggressive industrialist, a very beautiful Russian ballerina, a rather liberal secretary and other endless characters are mixed together to create and tell various tales. The clients register at the hotel, share their lives and then leave. Their lives merge in a way that reminds us of many current films and series. At first, when we start watching it, it seems that we find ourselves before one of those comedies that depicts an optimistic and light-hearted way of life. However, we immediately realize that what is before us is actually a drama. It is a film that speaks to us of honesty, generosity, friendship, ambition, pride, respect, and falling in and out of love. I am not going to tell you the film’s plot, as it is one that is complicated to tell and better to see. The staging is impressive: the hotel lobby, the staircases, the corridors and the rooms. All of the decorations are extraordinary. The scenes in which Greta Garbo crosses the hotel lobby like an authentic diva, followed by a group of bellboys loaded with flowers, are exquisite.

The stories are cross-linked, a formula that was greatly used after and that has been given the name of “Grand Hotel formula”.

My personal favourites are Joan Crawford and Lionel Barrymore. In her role as secretary, Joan Crawford is splendid, elegant, mischievous and coquettish. Lionel Barrymore plays the role of a tender, honest and reliable old man. For me, Greta Garbo is too distant and cold, although extremely beautiful and very elegant, she does not manage to captivate the spectator. The film received an Oscar for Best Film in 1932 and again in 2007 by the National FilmPreservation (I previously explained what this award is here).

I leave you a trailer for the film that was made later on as, according to the imbd.com, the original has been lost.

The film’s trailer (according to imbd.com, the 1932 original is lost):

A classic film that takes second place on our list of iconic films.