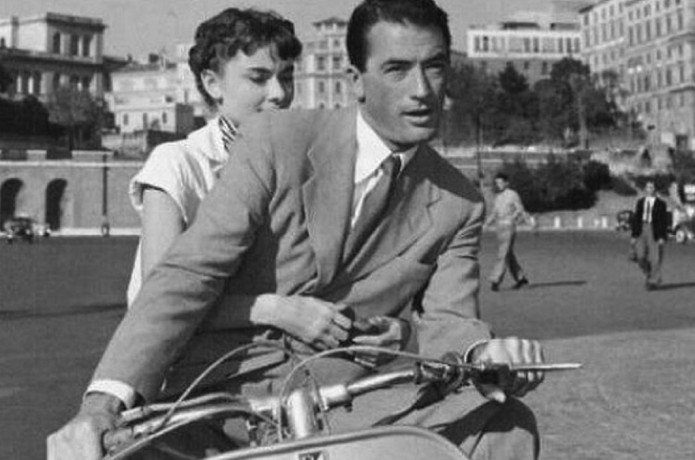 It won the Oscar for the Best Actress in a Leading Role (Audrey Hepburn), Best Writing and Best Costume Design. Roman Holiday is a seductive and elegant romantic comedy that pushed its main character and the city up to the icons of Hollywood.

The movie was thought to be shot in Hollywood and starred by a first level actress, such as Elizabeth Taylor, among others. But Wyler insisted on making it in Roma, since the expenses would be lower if they shot in black and White and hired a totally stranger.

To being the first film where the young and charming Audrey Hepburn was main character, it was a complete success for critics, public and the Academy. She played her role like if it perfectly fitted her: an European Princess who join a journalist to go in search of adventures across the city. Of course the journalist ended up totally in love with her. We can’t forget those fabulous scenes over the Vespa or the funny scene in the Mouth of Truth. The movie is like a beautiful fairy tail adapted to reality.

Audrey’s true innocence was legendary and the reason public would adore her forever.

With an impeccable photography, the film walk through the city of Rome and show us some of its most popular places. The scene where both characters cross the city on a Vespa caused the worldwide interest in that vehicle. Audrey wears a wedding dress that never used eventually. While she was acting for Roman Holiday she was about to get marry with James Hanson, a playboy from London. However they broke up just a couple of weeks before the wedding.

Audrey asked one of the designers (Zoe Fontana) to give her wedding dress to other girl who cannot afford herself a dress like that. The fortunate was Amabile Altobello, a 20 years-old girl who lived right outside Rome. The dress was in auction in 2009 and was sold for 16,000 euros.

Audrey while receiving the Oscar: