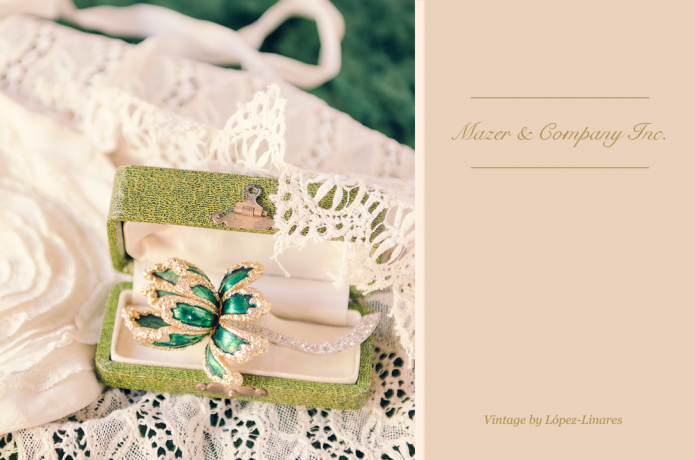 In the very early years of the 20th Century, the brothers Mazer – Joseph and Louis- began running a jewelry business in Philadelphia. It was 1917. After a few years they moved out to New York where they opened a jewelry shop that soon changed the name to Mazer&Company Inc.

From the beginning Macel Boucher was the designer of the business but in the mid 30s he abandoned them to establish his own enterprise.

In 1946 the two brothers left the nest: Joseph Mazer released Joseph J Mazer & Company (better known as JOMAZ) and Louis Mazer kept the original business until 1951 when he definitely stopped the comercial activity.

So it was Joseph Mazer who did the first Jobs for Jomaz the famous pieces dipped in gold. That was his clear emblem during the 60s.

And here’s one of those pieces; a brooch dipped in gold from the 60s. One of the pieces you’ll be able to see and enjoy in the next showroom that Lopez Linares is getting ready.

The first Mazer&Company Inc’s pieces are maked with the badge “Mazer Bros”. However, the last jewelry is already marked as “Mazer”, “Joseph Mazer” or “Jomaz”.

Jomaz had several designers along its short career: Andre Fleurida, Thierry Muglero or Sandra Miller were some of its artisans.

In 1948 an advert in the renowend Haper’s Bazaar magazine said about the brand:

“The precious look in fashion jewelry”. I didn’t know that Boucher had designed for them. I found a Boucher piece at a second hand store the other day and I think it’s the best piece I own. I’ll keep my eye out for their work in my many quests for great vintage brooches.