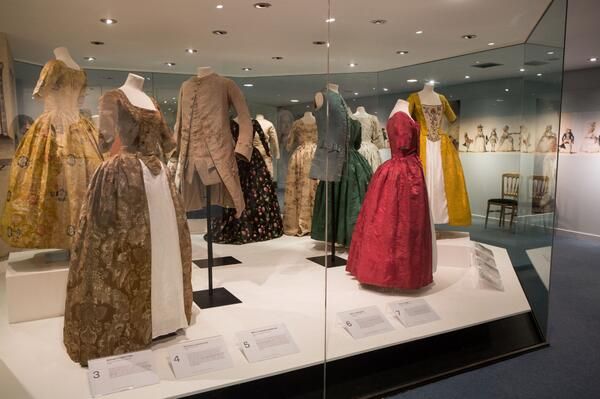 The title of the show says everything: “Georgian, Dresses for polite society”. Although “polite” is not the term I’d use, to be honest… I’d use “reach” more likely!

If the city of Bath is beautiful by itself, this exhibition makes it even more likely to be visited. There’s no excuse anymore!

For those of you who are not from the UK, Bath is a city situated in the South West of England, in Somerset and its origins are from the Roman period (43 B.C), when a Roman bath and a temple were built in the valley of the Avon River. However the Georgian period did this city really popular. That is exactly the time many of us imagine when we think of the medieval times: sumptuous dresses and wonderful jewelry worn by those who happened to be born within the High Society. Across Bath walked the Assemblies on their way to those famous local meetings that were popularize in the 18th century. But don’t think their events had something in common with our current Assemblies, since their meetings were huge parties to chat, show gallantry, play and over all, to dance. And then, their elegance dresses were crucial to show off how well positioned they were on society.

In 1771 the city – thanks to the quick grow in popularity – was worth housing a huge Assembly Room, today turned into the worldwide well-known Fashion Museum.

In total you’ll see 30 original gowns from the 18th century, each one worth admiring closely because of their distinguished fabrics. These clothes were made when George III was the King of England (his first years as the King) and show the most significant features of the High Society along two decades (1750 and 1760’s). If you have the chance to pay a visit, you’ll be lucky enough to closely admire the richly patterned woven silks and the hand-made embroidered coats and waistcoats.

The exhibition will show you in the last months how that old fashion has influenced in some way out current trends. Designers like Anna Sui, Meadham Kirchhoff, Vivienne Westwood, Stephen Jones or Alexander McQueen will complete the show with their 18th century-inspired men clothes.

The exhibition will be open until the first of January of 2016, so you have enough time to plan a luxurious visit to this dreamy city.