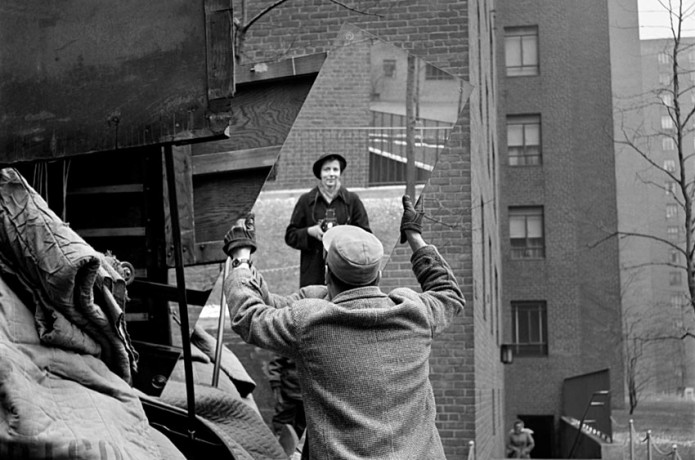 One hundred and twenty images presented as “Street Photographer”, however, they are only one tiny part of Vivian Maier´s (1926-2009) photographic legacy. We can see them displayed in Valladolid until July 8th. It is the first time that this anonymous portrait artist (nanny by profession) is being exhibited in Europe.

I discovered her thanks to Beatriz Garcia Couriel in one of her online photography courses. Vivian’s plain and simple work takes you straight to mid twentieth century Chicago and New York before you even realize it. I fell in love with her work from the first moment. Vivian developed her reels in the bathroom of a house where she was working as a nanny, finally accumulating hundreds of them. The majority still haven´t even been revealed.

Vivian´s legacy was discovered six years ago by total coincidence when, after an auction in Chicago, nearly 100,000 negatives were found. John Maloof, the owner of the material auctioned in 2007, still hasn’t managed to bring all of her material to light. The auction took place two years before the photographer´s death and it was carried out in order to help her pay off her debts, and come out of the precarious financial situation in which she found herself.

They are street prints, people from everyday life in Chicago and New York: prostitutes, beggars, tramps, children… They are simply everyday scenes bursting with magnetism.

One of the photographer´s series that most caught my attention from the first moment were her self-portraits. They´re reflections in mirrors or glass in normal every day places taken during her Sunday strolls. They are a series of self-portraits in which you can see a serious Vivian with a reserved, shy and secretive look about her. This is the feeling that these particular photographs transmit to me. The exhibition´s commissioner, Anne Morin, has named it the “never-ending search” for herself, “perhaps because of the real exploration of who she was”.

Street Photographer, after passing through Valladolid, will travel through Belgium, France and Sweden, amongst other countries, for the next three years.

During the month of May I carried out my first amateur photographic project. .  It consists of 31 black and white photographs of the “Barrio de Salamanca” in Madrid “31 Moments to Remember“. The last image of my project is a small tribute to this great artist.

My 13 reflections of my area. You may have already guessed that I plan to go and visit the exhibition. I think that it is a unique occasion to enjoy this artist’s work and I probably won´t have another chance to see it in my lifetime.

I will tell you about my impressions…