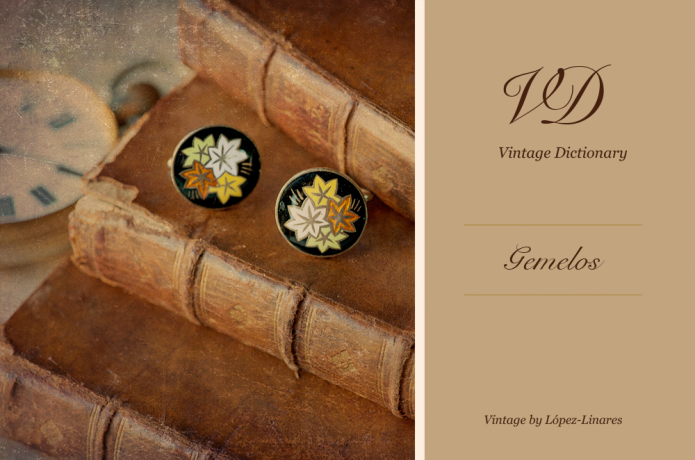 Cufflink: A fastener made with two pieces linked to a little rod or through a small chain. It’s used to close the cuffs in a shirt.

The cufflinks are designed only to be used when the shirt has buttonholes in both cuffs but they don’t have actual buttons. These cufflinks can be single or double and you can wear them either one in front of the other (like kissing) or overlapped. The most preferred ones are the first kind.

These pieces of jewelry are tipycally used by men. However, women have also adapted them to their style.

According to the National Cufflink Society there is proof of use of cufflinks in ancient hieroglyphs found in the King Tut’s tomb. Nevertheless cufflinks as we know them today started being used during the 18th Century.

It was the invention of the stamping machine with vapor along with the  electrometallurgy and the Guilloché’s turning machine that the kind of cufflinks we know today were able to be created. As for that moment, the process was handmade.

By the middle of the 19th Century this piece was popularize when French cuff shirts were fashionable – they still are today -. In that epoque was common to save a hair lock from a missed lover within the cufflink as a sign of shame and nostalgia.

In 1880, George Krementz registered in America a device to mass-produce buttons and cufflinks. As a consequence, from the mid 19th century onwards men in the middle and upper clases wore cufflinks. All of a sudden, most businesses in the US were ordering cufflinks for advertising purposes or as a gift for their clients.

Already in the 20th Century the fashion was to wear glazed coloured cufflinks made from gemstones. Artisans from Fabergé House travelled to America and Europe trying to teach worldwide this technique to be used in men jewelry.

If you are interested in the history of cufflinks and how they evolved over the years, don’t miss the Cufflink Museum in Conway (New Hampshire) where you’ll find over 70,000 pairs. I couldn’t find the website but if I finally do it, I’ll add it here as soon as possible.

One of the most completed collections I’ve heard of is the one belonging to the English Royal Family. There are three generations of kings in just one show of cufflinks, including the Eduardo VII, Jorge V and Eduardo VIII’s regins and their heirs. Nowadays is being extended by the current Prince of Wales.

Cufflinks are an elegant, discrete and long-lasting gift. It’s a memory for a whole life, a jewel that will pass from you to your heirs. They will live on.